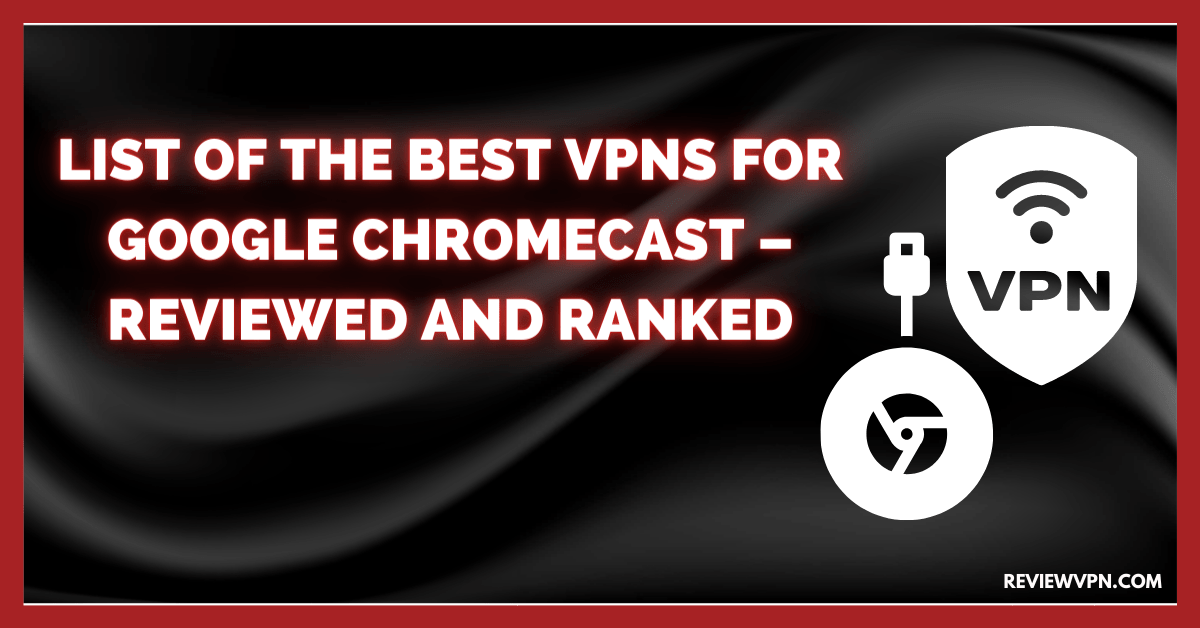 List of the Best VPNs For Google Chromecast – Reviewed and Ranked

The Google Chromecast is one of the most popular video-streaming devices.

It can provide a wide range of movies and TV channels to your television. Sadly, many of those TV channels have geographical restrictions, which means you can only access those channels from a specific country. Also, there are live streams that are subject to geo-location that block you from streaming sports as well as other events if they go live within a particular region.

Nonetheless, a Virtual Private Network or VPN can bypass these geographic limitations and let you stream your favorite streaming TV channels from across the globe. A VPN encrypts all the internet traffic of the Google Chromecast and routes it via a server in a remote location of your choice, thus concealing your actual location from the streaming platform.

What Is a Virtual Private Network or VPN?

A Virtual Private Network or VPN provides you privacy & anonymity on the internet by generating a private network that originated from a public web connection. A VPN service hides your internet protocol address or IP so your online activities will be untraceable. Most importantly, a VPN establishes secure & encrypted connections to deliver greater privacy compared to a secured Wi-Fi hotspot.

Chromecast is a great device that digitally projects video content from PC, mobile phone, or tablet to the television. Nonetheless, the streaming platforms available with it, such as Netflix or Hulu, are Geo-restricted in several countries of the world, and in order to access them, you must have a VPN for your Chromecast.

The Best VPN for Google Chromecast

IPVanish is a fast, very easy-to-use, and affordable VPN service provider that incorporates sturdy encryption and guarantees a perfect user experience. With the IPVanish VPN service, your web activity is untraceable. This VPN service has a strict no-logs policy so even its own employees will never know your activities on the internet. It offers an internet kill switch feature. Wherein, your information or data will still be secured even if your internet connection drops.

The VPN’s encryption standards are very tight. It utilizes a SHA512 authentication, 256-bit encryption on the OpenVPN protocol, & a DHE-RSA 2,048-bit key exchange with remarkable forward secrecy. Thus, even if a person’s account is vulnerable, hackers, ISPs, or the government can never decrypt previous session information and launch browsing history.

IPVanish VPN service lets you select between 850 servers across 60 countries. It allows ten devices to connect simultaneously, which makes it an even affordable VPN service provider if you want to share it with your family or friends. The VPN service has applications for both Android and iOS.

Pros and Cons for IPVanish

If you want a VPN service provider that is robust in the United States and Europe but also provides servers in places such as Brazil, Australia, Japan, & South Africa, then IPVanish VPN is the best option.

Other VPN Services for Google Chromecast

ExpressVPN is one of the best VPN service providers in the world. It offers more than 3000 servers in about 94 locations. All of its servers are heavily encrypted and provide fast speeds.

Regarding speeds, this VPN provider is one of the fastest VPN services you’ll ever find on the web. However, all the performance ExpressVPN does come at a price. The ExpressVPN for Chromecast will cost you $6.67 a month. That said, the expensive price of ExpressVPN is worth it and makes casting with Virtual Private Network a lot easier.

If you’re on a budget, then one of your best options would be Surfshark. Despite only costing $2.49 per month, it allows you to unblock pretty much all geo-restricted platforms and websites from across the globe.

In addition, with more than 3200 servers all over the globe, Surfshark manages to provide fast streaming speeds. It lets you literally stream your most-liked movies & TV shows in Ultra High Definition (UHD) picture quality. For streaming fanatics out there asking – Can I stream Netflix in Spain? Definitely yes, streaming enthusiasts can watch any Netflix content including in Spain with the fast-speed servers of Surfshark.

NordVPN is among the most popular VPN service providers for Google Chromecast in the market. It has the largest network servers compared to other VPN service providers, consisting of over 5500 servers in more than 59 countries. Similar to any VPN service provider, NordVPN utilizes powerful encryption protocols that not only aid users secure their privacy but also help them unblock popular streaming platforms, such as Netflix.

Additionally, NordVPN’s privacy policy is flawless, as it ensures strict no data logging. Thus, NordVPN on Google Chromecast offers one of the best experiences when using the streaming device through VPN.

With over 7,400 servers around the world, CyberGhost lets you connect to almost all countries, including Germany, Sweden, France, the United Kingdom, Australia, and the United States. Also, you’ll be amazed by the compatibility of this VPN service with a wide range of Android-powered devices, which include Google Chromecast, Amazon Fire Stick, Android TV, Android smartphone, and tablet.

For you to get the most out of a VPN service for Chromecast, the VPN service must have the following features:

How To Set Up IPVanish VPN On Google Chromecast

A VPN is a user-friendly app that functions in the background and does everything for you. An amazing VPN, such as IPVanish, is very fast, you will not even notice it while you’re streaming videos on your Google Chromecast. To get access geo-restricted content on Chromecast, follow the steps below:

Why do You need a VPN for your Google Chromecast?

A Virtual Private Network or VPN is a handy online tool that lets you gain added privacy & freedom on the web. A VPN functions by encrypting data and allowing web users to hide their IP address – making the person be in a different region or country. When used in combination with Google Chromecast, your streaming device acquires these benefits – ensuring your privacy while streaming on the internet, protecting you from WiFi hackers, and letting you access geo-restricted content from across the globe to cast onto your TV screen.

How does a VPN work?

When you connect the Chromecast to a VPN server, your true IP address is masked and the websites and streaming platforms you visit will indicate that you’re positioned in the remote location where the server of the VPN you’re linking to is located. For instance, if you live in the United States but connect to a VPN server in the United Kingdom, you actually seem to live in the U.K. and you can use streaming platforms to stream videos from there that are usually geographically restricted.

If you utilize a VPN app, it is not important where you actually live. A VPN lets you instantly connect to a network server in another country and use the web as if you were actually residing in that place. Wherein, you’ll be given the freedom to access a nearly endless list of entertainment content with your Google Chromecast.

Can I use a VPN app with Google Chromecast?

Is it okay to use a free VPN service with Google Chromecast?

In any case, nearly all free VPN services require you to use their applications and you can’t manually configure the connections. Thus, router setup is not an option. Also, free VPN services implement bandwidth restrictions  & data caps that can suspend whatever you are doing on the internet.

2. On the search bar, you can use the google voice assistant to find IPVanish or by typing it. Select enter.