The prices for HideMyAss VPN are:

While the prices quoted above might seem on the high side, ReviewVPN always has the best offer available. Click here to see the lowest possible price for HideMyAss.

As you can see, if you choose a 12 month or a 24-month plan, you’ll get a much sweeter deal compared to paying on a monthly basis, i.e. there are considerable savings to be made (between 45% and 56%, which is a lot) if you’re a regular VPN user. However, if you’re going to use HideMyAss for a limited amount of time, or you just want to check it out and see how it “feels”, it’s nice to have a monthly option.

Frequently Asked Questions
What does it cost?
Prices start at $2.99 / mo
How many servers are there?
940+ servers in 280+ countries
What apps are there?
Windows PC, Mac, iPhone/iPad, Android & Linux.
Are there logs?
No Logging of online activity
What protocols exist?
OpenVPN-TCP, PPTP, L2TP, OpenVPN-UDP
Is there a trial?
Free 7-day trial 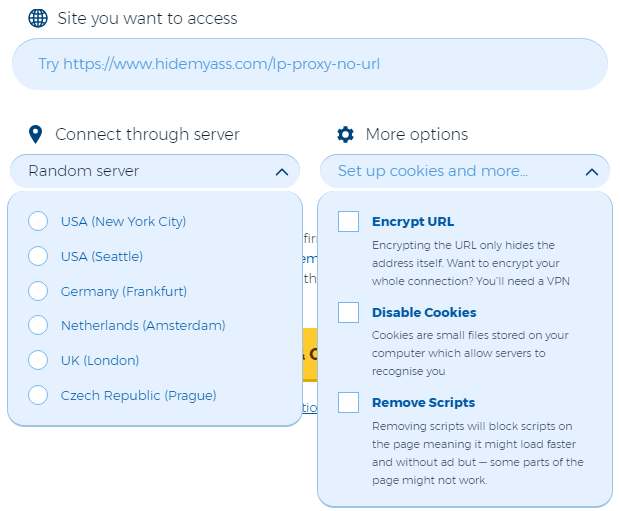 Privacy and anonymity are the main reasons for which people are paying top dollar on VPNs, and HideMyAss’ terms of service boast, let us quote, “total privacy and protection”. Okay, but legalese aside, what does it mean? Unfortunately, if you read HideMyAss’ privacy policy papers, you’ll see that they’re keeping lots of data on their users, including usernames, the IP address of the VPN server used, the IP address used to connect to the VPN (major red flag here), the amount of data uploaded/downloaded via VPN, and even the connect/disconnect time-stamps (another huge red flag). On top of that, this VPN service does the following: monitors the use of the network for technical purposes and to manage and improve the service (red flag), prevent and detect fraud against the service (as in credit card fraud, etc.), prevent and detect abuse of the network, such as spamming, file sharing or other illicit activity.  These are quotes from HideMyAss’ ToS by the way.

To make a long story short, they do log quite a lot.

If you’re looking for the ideal VPN service provider that allows or even encourages torrenting, look somewhere else, this is not the droid you’re looking for. HideMyAss’ ToS specifically warns about using their service for illegal torrenting. Now, even if torrenting is perfectly possible on HideMyAss, as their software doesn’t block torrent clients, and you even get dedicated high-speed/optimized servers for torrenting/P2P stuff, you may very well end up receiving nastygrams from your ISP; basically, forget about anonymous torrenting with these guys.

Even if Kodi is arguably one of world’s most popular streaming platforms, if not the most popular, HideMyAss doesn’t do the job here, as in their service is not compatible with Kodi if you’re using the official software; however, you can make HideMyAss work with  Kodi via an unofficial add-on if you insist.

Here we have some good news:  you can stream Netflix via HideMyAss, and obviously, the same story goes for other geo-restricted video-streaming services, including YouTube or Hulu, provided you live in countries like the UK or China, where internet is not free and various streaming services are blocked by ISPs courtesy of Big Brother.

There are no known conflicts between HideMyAss VPN and the ToR browser/Brave browser (Brave offers ToR in private-tab in case you didn’t know), so you can use HMA in order to prevent the entry node from seeing your ISP assigned IP address.

Speed is all you need if we’re talking about video-streaming and VPNs, and HMA does really well in this regard. Obviously, you may see a reduction in your regular internet-speed with your VPN on. In case you were wondering, the average speed with HMA-on is 36.62 Mbit/s (Honk Kong, US, UK, and Australian servers), which is outstanding, with burst speeds of 293.9 Mbps (UK server), which make HMA excellent for gaming and/or streaming in 4K.

HideMyAss offers decent encryption for both the data channel and the control channel, Blowfish 128-bit cipher with HMC SHA-1 hash authentication for the former and an AES-256 cipher with RSA-2048 handshake encryption and SHA-1 hash authentication for the latter. The default encryption protocol is OpenVPN, the industry golden standard, and you also get PPTP and L2TP/IPSec. However, you should stick to OpenVPN, as the others might have been compromised by Big Brother.

You get 24/7/365 live-chat, social media and email customer support. Most emails are answered within a few hours, but you may have to email again if you have waited over 48 hours without response. There’s also a ticket-system in place via their website.

HideMyAss is owned by a UK based firm, Privax Limited respectively. What does it mean?  The short answer is that the UK is a member of the Five Eyes Security Alliance, which is basically Big Brother on steroids, not to mention the fact that the United Kingdom is one of the most aggressive/intrusive countries in the world when it comes to snooping on “civilians”, i.e. their own citizenry. The point being, if SHTF, HideMyAss will hand over your “metadata” (read all of your private data) to the government as soon as Big Brother comes knocking on their door.

Moreover, there have been numerous users complaining about their accounts getting suspended due to Digital Millennium Copyright Act (DMCA) statutes, also known as copyright infringement issues (read torrenting, video-streaming and the like).

HideMyAss offers apps for basically all platforms, including iOS, Android, Windows, and Mac.

HideMyAss really shines in this regard, as it offers an impressively large network of 940+ servers in 280+ countries all around the world.

HideMyAss is a top-dog in the VPN industry, with a robust client base, yet despite its popularity and success, it makes for a mediocre VPN service provider. Considering the fact that HMA is managed and run in the United Kingdom and it keeps logs on its users, if you’re that kind of user who treasures privacy and anonymity (especially if you live in a dangerous country like China, Iran or Saudi Arabia), you should look elsewhere.