VyprVPN has a competitive price that can adapt to all pockets. For starters, there is a three-day free trial, although you need to register first. Then, there are two plans: VyprVPN basic and VyprVPN Premium.

The former costs $9.95 per month and allows users to connect up to three devices at the same time, but it doesn’t provide access to the VyprVPN Cloud service and the Chameleon protocol. It can be obtained in the yearly mode, and the total amount would drop to $5 per month (a one-year payment of $60.)

The Premium plan has a price of $12.95 per month. It includes the same features as the basic one (servers in 70 nations, AES 256-bit encryption, NAT Firewall, full Netflix compatibility, VyprDNS, a kill switch, and site filtering) plus VyprVPN Cloud and the proprietary Chameleon protocol that scrambles metadata to avoid censorship and similar settings. The yearly cost is $80.

Frequently Asked Questions
What does it cost?
Prices start at $3.75 / mo
How many servers are there?
70 + Server Global Locations
What apps are there?
Windows PC, Mac, iPhone/iPad, Android
Are there logs?
Zero logs are kept
What protocols exist?
PPTP, IPSec, and L2TP
Is there a trial?
3-day free trial 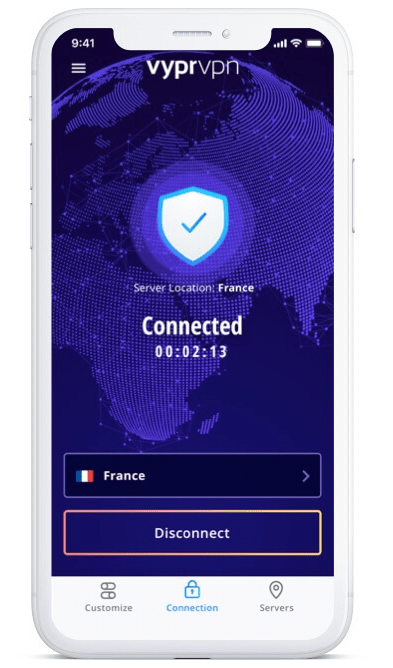 Whereas VyprVPN used to collect some connection logs for up to 30 days, it has now upgraded its privacy to turn into a true no-logging VPN. In fact, it was publicly certified as such in November after an audit.

The privacy policy states that “VyprVPN is a zero log VPN Service. We do not record or retain any data when you use the VyprVPN Service.”

“We engaged a respected security firm to audit our zero-log policy, so users have a third-party validation of our logging policies.”

Another area in which VyprVPN seems vastly improved is in torrenting allowance. In the past, the brand discouraged the activity, but now the situation has reversed, and users can share P2P files with confidence.

Some past allegations have VyprVPN using the person’s connection logs to forward DMCA notices to the users, with the possibility of closing its account. However, that has changed now after the update to a no-logging service: the brand does not forward anything because there isn’t any info to send.

Now, VyprVPN clearly states that “peer to peer and BitTorrent traffic is allowed.” And the best part is that speeds are comfortably above average.

VyprVPN can be installed, set up, and run with Kodi without any issues. Using the brand’s encryption, you will be able to access Kodi add-ons and repositories from nations where they are restricted.

While not all servers work, VyprVPN offers full Netflix compatibility, including the ability to unlock the American region. This is noteworthy because of Netflix’s recent success in identifying and blocking VPN connections.

The most likely scenario involves you checking with the support staff to see which servers you can use to enter the American Netflix region. VyprVPN is a fantastic option to stream because of its high speeds, multiplatform compatibility, and server diversity.

Unfortunately, VyprVPN does not offer compatibility with The Onion Router (TOR.)

VyprVPN is speedy. Tests have shown that, in most cases, it manages to only slightly slow down the person’s connection. The download and upload rates can compete with almost any VPN service.

VyprVPN performs superbly in both nearby servers, namely the European area, and long-distance servers (Canada and the United States, for example.) With a baseline connection of approximately 100 Mbps, VyprVPN gets between 70 and 85 Mbps in Europe and 55-60 in North America.

VyprVPN implements the military-grade AES 256-bit encryption,and it has other pro-security offerings such as OpenVPN, a kill switch, DNS leak protection, IP, and WebRTC leaks, a NAT Firewall, the Chameleon protocol, and no third-party servers or DNS.

In fact, VyprVPN is extremely secure and reliable: it has a great jurisdiction (Switzerland,) it has no IP or DNS leak problems, and when streaming, it has no buffering issues due to excellent speeds.

Other protocols include PPTP, IPSec, and L2TP. The most exciting one is the Chameleon tool, which is the brand’s native protocol that helps the user bypass heavy censorship such as China, Russia, North Korea, or Iran by scrambling the person’s metadata and avoiding deep packet inspections.

Customer support is also highly improved. The ticket support is highly responsive and quick, a live chat feature has been added, and their dozens of setup articles to help you through the process of installing VyprVPN on several devices.

VyprVPN has approximately 700 servers in 70 nations around the world. You may think that it’s not an elite network, but consider that the servers are all owned by VyprVPN and its parent company, Golden Frog. There are no third-party servers, which represents fantastic news for the user’s privacy.

VyprVPN is a vastly improved brand that has proven that it is continuously looking for ways to offer a better, more efficient and user-oriented service. It has robust encryption, a no-logging policy, excellent speeds, great apps, multiplatform compatibility, a fantastic proprietary protocol, and servers in 70 nations.