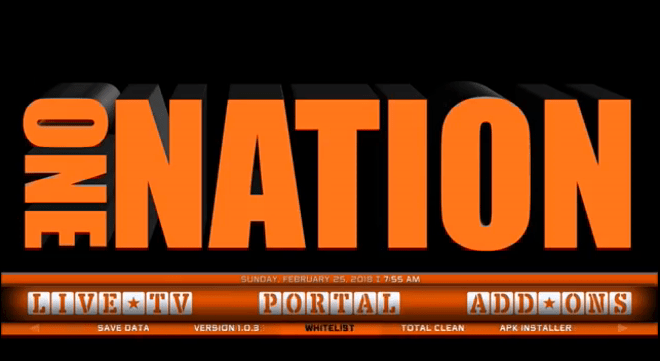 In this article, we will help you install One Nation Kodi Build on Firestick.

One Nation Kodi build is behind some of the most popular builds available on Kodi. They offer an all-in-one solution. With various themes including Star Wars and Mario. One Nation has remained popular because it’s relatively small in size for a build and keeps updated with add ons which work, so reduces the bloat many builds have with an excessive number of addons.

Kodi started as a piece of homebrew software for Xbox gamers to store and play media on their Xbox in 2002. Since then it has grown to become an enormous piece of feature-rich software with millions of downloads.

Run and maintained by the XMBC Foundation, Kodi is now in its 18th major version and continue to grow and improve. Its main draw is the extensive library of add ons, both official and from unknown sources. These add ons give unlimited additional functionality from allowing you to watch Live TV in Romania to the latest Holly wood blockbuster.

Kodi has been the media player of choice for Android TV users because it has a 10-foot user interface that scales Android applications to be seen on a TV and can be used, using a TV remote.

A build is a preconfigured Kodi file that contains add ons, skins and customized settings.

They are a great place to start if you are new to Kodi, as it means you can fresh install an all in one package which has everything you could need. Rather than having to find and install each add on one by one.

What is One Nation Kodi Build?

One Nation was previously known as Pyramid originally. The original developer decided to move and handed over the codebase to a new developer. For a brief time, it was then known as The Dogs Bollocks before becoming One Nation

How to Install One Nation Kodi Build

Get up and running with One Nation using these steps

One Nation is one of the oldest and most respected repositories on Kodi, with a long history of releasing quality files.

Your biggest danger will come from corrupted files downloaded from non-official websites and URLs.

One Nation is a grey area but not by much. The build can hardly claim to be legal as it acts as a media library between illegal torrenting websites that host copyrighted content illegally and users.

Its saving grace is that One Nation does not store and host the content itself. Having said that we don’t recommend you use Kodi with an unencrypted connection as you will find over time some and then all of the add ons will stop working as their IP addresses are denied access by your Internet Service provider.

Yes, always use a VPN, and by that we mean a VPN you pay for and has trusted reviews.

Without a VPN some of your Kodi addons may not work, your ISP will log your browsing history, and third parties can track back your home location and IP address.

We recommend installing an active VPN on your device before downloading and installing One Nation. This is to keep your connection encrypted and anonymous. We recommend Best SurfShark Deal.

How to Install Surfshark on Firestick with Screenshots

You can download Surfshark directly from the Amazon App store. It will be easy for you to find Surfshark with your Firestick’s Find feature. Refer to our screenshots below.

Tough to know why you would need another build, as you could just pick another one of the many available under One Nation. But here are a few of our favorites:

If all else fails, just use Google to find the best working builds for that month or check our list of Best Kodi Builds.

One Nation Kodi Build is one of the best and most trusted build providers out there.

Importantly for us, they keep the size down. Coming in at around 300MB when some builds can reach over half a GB. Size is important to keep down if you are using a low RAM device like a basic Amazon Firestick.

Bloated builds can cause your Kodi application to freeze repeatedly or even crash altogether.

Don’t worry too much about getting the wrong build, if you change your mind you can always just install a fresh version of Kodi or revert it back to factory settings.

Also, with One Nation Kodi build you get over 40 different builds to choose from. Each one custom-made and of varying sizes. Simply put, there is something for everyone and it’s difficult to think why you would need another repository.