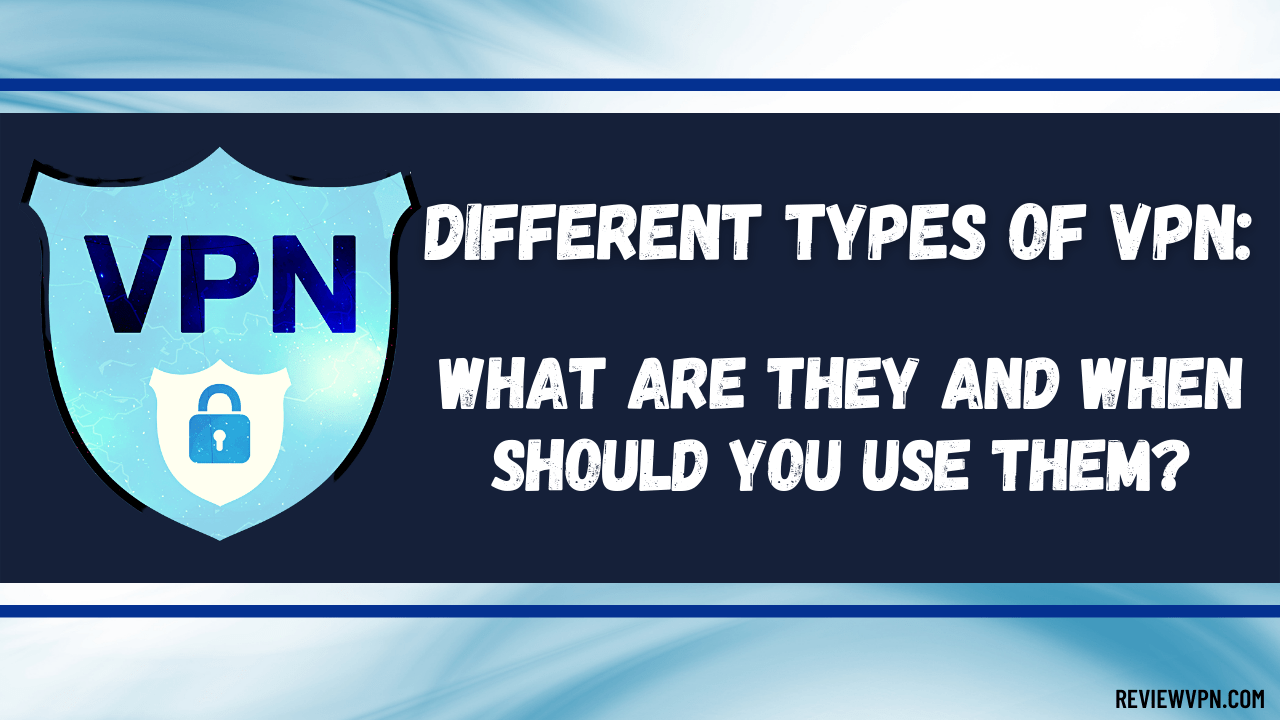 Different Types of VPN: What are They and When Should You Use Them?

This article will discuss the different types of VPN.

There are numerous VPN services available on the market today, and they have grown in popularity across major platforms due to the level of protection they provide to their clients. Whichever type of internet user you are, a VPN can significantly improve your online experience and security while utilizing public wi-fi or the internet.

However, there are widespread misconceptions or misinformation about the various forms of VPN. How can you know if you’re using the appropriate VPN for your online activity? That is why this post will enlighten you on the different types of VPN so you can determine which ones to seek in a VPN service based on your needs and usage.

Moreover, VPNs operate on a variety of different levels, and to select the best VPN for you, you must first understand how they work. So, without further ado, let’s start figuring out the different types of VPN.

VPN is a network technology that provides a secure tunnel over the internet. It enables users to exchange and receive data while remaining anonymous to the rest of the world. There are numerous types of VPN, but one of the most common and widely used is Remote Access VPN.

Remote access is popular with businesses because it enables remote users to connect to network resources located in several places. By establishing a secure encrypted tunnel between sites, it extends the private network to a remote place.

Individual VPNs from major VPN providers such as IPVanish and others are also a form of remote access VPN. These VPN service providers have VPN servers located throughout the world to which you can connect, and each of these distinct servers allows you to select a different location each time you connect.

Site-to-site VPNs differ in that they connect many networks rather than connecting individual devices. Essentially, this network of sites connects via a secure link. The secure connection enables to transfer and receive data from any location on the network while encrypting it for security and ensuring its integrity by preventing eavesdropping or tampering.

Moreover, this form of VPN enables you to centralize your organization’s network security policies on several servers rather than managing security on individual systems at remote locations. Site-to-Site VPNs connect numerous network locations, not just between two networks. With that, data can be delivered and received throughout the entire network via a secure network gateway, allowing for simultaneous remote access to various locations.

Furthermore, Site-to-site VPNs safeguard network communication through the use of encryption and authentication. They establish a secure connection that prevents unauthorized access to network traffic.

What is the main distinction between these two types of VPN connections?

While the types of  VPN (Virtual Private Network) have their own set of advantages and disadvantages, the distinction is simple: a Remote Access VPN enables employees to connect to corporate network resources from remote locations such as their homes or while on the go through a single encrypted connection. On the other hand, Site-to-Site VPN enables networking resources distributed across numerous locations connected centrally by a physical link or an authorized data access channel.

Additionally, a remote access VPN enables users who are not connected to the primary network to securely connect to it via the internet. Site-to-site VPN, on the other hand, is used to connect locations via a secure shared gateway through which all data goes.

As the type implies, these are VPN services that are utilized privately or by an individual connected over a private connection. This form of VPN is intended to prevent IP address leaks and data breaches when browsing online material for personal leisure.

Apart from security, there are other advantages to having a personal VPN. The majority of users wish to utilize them to gain access to restricted content. So if you live in a country where certain websites are blocked or you don’t want your ISP to be able to monitor your activity, a personal VPN is regarded as the simplest solution.

This form of VPN is employed by huge corporations since, of course, a corporation requires a dependable VPN service to encrypt all incoming and outgoing data. Apart from that, organizations frequently have confidential files that they do not want anyone to access, which is why they utilize business VPNs. Particularly now that the majority of people are working from home as a result of the epidemic, many organizations have relied on this form of VPN to ensure the highest level of anonymity for file transfers for both employees using remote access and site-to-site VPNs.

Moreover, you may like to read our post on the best VPNs for business. So you could learn more about which VPNs are suitable for businesses, as this sort of VPN offers a variety of unique features and options.

What’s great about modern technology is that you can even obtain free VPN access. While these free VPNs have fewer features than personal and business VPNs, it’s worth noting that they provide a free VPN service for people on a budget or who are just starting with VPN exploration and use.

Meanwhile, some personal and business VPNs provide a free trial or a money-back guarantee to compete with free VPN services. Alternatively, they offer both free and premium VPN options, allowing users to easily upgrade from the free to the premium plan.

You can read this article to learn more about free VPNs as well as a list of providers who offer free VPNs.

Currently, your IP 3.238.252.196 is visible to everyone and your Browser is being tracked by Advertisers & ISP Provider.

The Best VPN for All Possible Usage

Now that we’ve covered a variety of aspects of VPNs, it’s important to determine which one is truly the best when it comes to the various criteria that contribute to the best VPN service.

IPVanish is one of the most popular VPN services and has been the best due to its no-log policy, fast internet connection, an unlimited number of simultaneous connections, numerous protocols used, end-to-end encryption, and other security measures. It has been preferred by many because it ensures the highest protection when it comes to safeguarding and encrypting one’s internet activity. Moreover, it features the best functionalities of a VPN such as the following:

Other VPN Options for Businesses

Perimeter 81 is another well-known VPN for business. It provides industrial-strength security features that safeguard your network from advanced threats and targeted network attacks. Apart from that, it offers blazing speed for a minimum subscription fee of $8 per month for five users. It uses AES-256 bit bank-level encryption and supports the OpenVPN and IKEv2 protocols. Moreover, Perimeter 81 is available on a variety of platforms, including Windows, Mac, Linux, iPhone, Android, and Chrome. However, compared to IPVanish, there are few admin logs on their service and have fewer servers available with 700 servers in more than 36 locations.

TunnelBear is a decent free VPN that keeps no logs, has solid encryption, and includes the kill switch, which is the most popular feature of VPN services these days. Furthermore, it employs military-grade AES-256 encryption and SHA-256 authentication, as well as OpenVPN and IKEv2 protocols, making it a viable alternative for a free VPN. However, because it is free, expect it to have fewer features than premium VPNs. As a result, I can say that this VPN is solely suitable for personal usage.

What are the two types of VPN connections? (choose 2)

Which type of VPN is most commonly used today?

Today, the most often used VPN is a remote access VPN. The majority of VPN services use this since it provides individual privacy and is suitable for personal use.

How many types of VPN protocols are there?

There are various VPN protocols available, but WireGuard, IKEv2, OpenVPN, L2TP, IPSec, and PPTP are the most regularly used.

Yes, VPNs are safe. In fact, it gives an additional layer of security to its clients’ activities.

Yes, using and installing a VPN on any device is legal.

Are there free VPNs available?

Yes, there are some free VPNs available such as Tunnelbear, and some VPN providers offer a free trial or a money-back guarantee. However, free VPNs typically offer fewer capabilities than paid and premium VPNs.

Virtual Private Networks (VPNs) are an important part of any organization’s or individual’s security. VPNs encrypt data at the source, transfer it via an insecure network, then decrypt it at the endpoint.

It transfers data securely over public networks. Keeping it safe from prying eyes, hackers, and other systems that use IP to determine someone’s identity.

We hope we were able to enlighten you on the key differences to search for when selecting a VPN subscription.