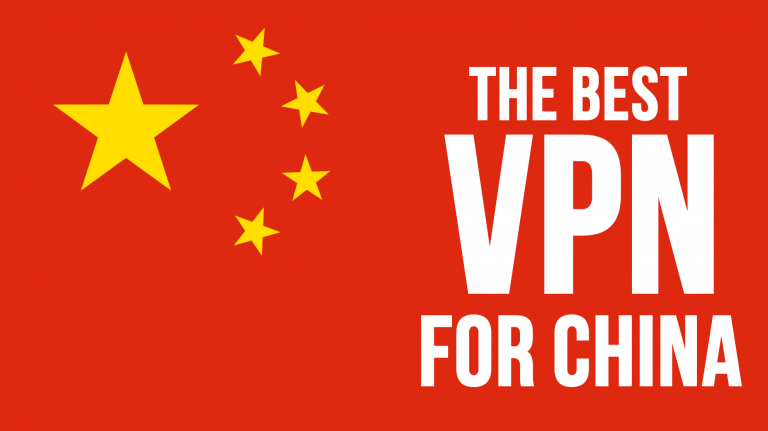 If you are planning on travelling to China, then make sure you pack a VPN for going. China, long known for its enormous efforts to control media censorship, has long blocked many websites that the West takes for granted.

Instead of Google you will need to use Baidu, no Facebook think Weibo. The list goes on. Travelling to China without a VPN will mean you may not even be able to access your email accounts, as the list of banned websites is extensive.

Before we look at the best 5 providers for VPN in China, let’s get some understanding around what censorship in China is like and how it can be circumvented.

What is the Great Firewall of China?

Operated under the “Golden Shield Project” and administered by the Bureau of Public Information and Network Security Supervision. The Great Firewall of China is the biggest network censorship project in the world.

Specifically designed to regulate domestic internet connections and block access to foreign websites. Though it uses the guise of censorship and protecting Chinese citizens, it has also proven to be a highly valuable tool for China to develop and nurture Chinese companies who would be vulnerable to stiff competition from more developed Western technology companies.

The project was started in 1998, with the first part completed in 2006, and second in 2008. It is I administered by an estimated 30,000-50,000 people and is constantly evolving. This number is actually a drop in the bucket compared to the number of internal censors China forces companies to hire to police their own networks. Recently many VPN provider’s websites and applications were blocked in China, making it extremely difficult to buy a VPN in the country.

The reason why many VPN’s don’t work anymore in China is because all the most common security protocols can be detected by their network sensors and automatic firewalls.

Most standard VPN’s will use OpenVPN, Cisco IPsec, IKEv2/IPsec, L2TP/IPsec, SSTP or God forbid PPTP. All these protocols have been fine tuned by the Great Firewalls Deep Packet Inspection tools. When a connection is found to be using these protocols it is blocked. Meaning your VPN no longer works.

All the VPN providers in our list have had to put time and money into custom designing proprietary software which will allow your traffic to appear like normal secured HTTP traffic and therefore be indistinguishable to the firewalls.

Can The App Be Downloaded in China Without a VPN?

The chances are that you won’t be able to download the application while in China. All the major VPN provider’s websites are blocked with new ones being added each day

Is The Providers Website Blocked in China? Do Mirrors Exist?

You can use this site to check if your VPN providers site has been blocked. Chances are it has. Mirror’s do exist and are popping up all the time, but are quickly blocked, plus without a VPN and access to Western sites, you would find it hard and time consuming to find a mirror if you are already in China.

Are There Special Technologies for Accessing VPN’s in China?

However, once discovered the Chinese authorities will move quickly to block the service. VyprVPN is a good example of a provider who used a technology called Chameleon to allow their service to be used in China. After a few years and probably due to it becoming more popular it popped up on the radar of the Chinese government and the loophole was closed.

Other companies like StrongVPN have released a host of mirror sites, giving URL’s that may not be already blocked.

The short story is that no VPN provider can successfully push back against the Chinese government, so it becomes more a case of using technology that allows users to fly under the radar. Once detected the enormous resources of the Chinese agencies are no match.

Also, especially around public holidays, there will always be extra rumblings about VPN’s being blocked. This may mean you have to disconnect and reconnect to set up a new IP and then browse freely.

Conversely the Chinese government is aware it would be impossible to block all VPN providers and connections, so sometimes you just need to reconnect multiple times.

The good news is that unlike the average Chinese citizen, you can download and subscribe to a VPN provider before you go. Once in country use any of our Top 5 VPN providers who have a proven track record of working anywhere in China

StrongVPN along with VyprVPN and Astrill is one of VPN providers who have always placed a heavy emphasis on accessibility in China. Their service was so successful that they attracted some unwanted attention from the Chinese government and had to reconfigure their Chameleon protocol which had allowed users to connect successfully for years.

They are a relatively low-key outfit with 650+ servers in 20 countries. Pretty small compared to someone like NordVPN or ExpressVPn but they certainly pack a punch.  As they offer almost 60,000 IP addresses to choose from. They have a clean and easy to use interface with good global coverage. The mobile and web applications have been redesigned and are lightweight and easy to use.

Based in the US, they have a solid zero logs policy, but where it gets interesting are their security protocols.

As standard they offer IKEv2 and Open VPN protocols. The common best practise in China is OpenVPN with a UDP port connection. You also get an added Scramble function which further obfuscates your connection. Essentially make it look like other connections and preventing it from being blocked. This is particularly useful when bypassing network traffic sensors in China.

Prices start from $5.83 per month on a yearly plan and you can connect an impressive 12 simultaneous devices. Far more than the industry average of 5. As well as a 30-day money back guarantee.

However recently the ex-pat’s favourite VPN has started to be overtaken by more established player’s in the industry. Though StrongVPN has several working mirror sites, which means it is a good fail safe if you haven’t downloaded a VPN before entering a China. Also, a lot of the down tick in popularity was due to scrutiny from the Chinese government.

NordVPN is one of the top tier VPN providers that has a good track record of working in China. With millions of users and 5,000+ servers in 60+ countries they have the size needed to constantly adapt to the changing climate on censorship in China.

Multi-year packages start from $2.10 and they have a host of security features which helps make them one of the most secure VPN providers around. From their Cybersec tool which acts as a built-in ad-blocker, malicious website and malware blocker. To Double VPN which routs your traffic through 2 VPN servers.

There are 2 reasons why NordVPN tends to work in the China. Firstly, they don’t have any servers China side. Most of the servers you connect to are in Hong Kong. Secondly connections to China are routed through “obfuscated” servers. These servers allow your traffic to resemble HTTPS traffic which is secure and encrypted. As this is a common type of data packet, they do not alert network sensors.

You can also manually set an IKEv2 connection through your mobile. NordVPN has a few mirror sites to download when in China, but we recommend you do so before landing as these pages can be blocked anytime. Another plus is Nord’s responsive 24/7 chat so if you are having a persistent problem connecting to them you can chat to an agent and find a working server.

ExpressVPN is the other top tier VPN provider which has proven to be consistent and working when in China. Like NordVPN they don’t use any servers in China. Also, they have all their own DNS servers. Through the mobile application you can make sure that ExpressVPN always connects first prior to any internet connection. Also turning on IPv6 leak protection and making sure you always use ExpressVPN’s DNS Servers.

ExpressVPN has 3,700+ servers across 94+ countries. They offer consistent speeds globally, which is rare for a provider. You tend to see a dip in speed in Asia and South America. They are also commonly hailed as the No.1 provider for speed and stability.

You’ll expect to pay a bit more for ExpressVPN with a yearly package starting at $8+ but you get what you pay for. Their zero logs policy has been put to the test in an international criminal case and not been found wanting. People use ExpressVPN because they know it will work most of the time in China.

Using ExpressVPN allows you not only to browse but also to access applications which would otherwise be banned in the country like WhatsApp, YouTube and Gmail.

Astrill VPN was started in 2009 with the over riding goal of overcoming global censorship. To that end they have regularly been at the forefront of giving uncensored internet access in China. A relatively small provider they are strongly focused on China and other countries with high rates of censorship like Iran.

With 300+ servers in 60+ countries, they are nowhere near the size of Nord or Express, but what they lack in size they make up for in security. They also have servers in Taiwan which offers the closest possible access to China.

What makes Astrill special is the sheer number of VPN protocols which you can access. In any other country in the world, you could happily use OpenVPN, but in China this would get you blocked immediately. That’s because its data packets are easily detected by a DPI (Deep Packet Inspection) which means that any VPN provider that wants to work in China needs to have a security protocol which passes inspection and looks like regular secured traffic.

Astrill have 2 proprietary security protocols including Open Web and StealthVPN. Stealth which is used now makes your data indistinguishable to automatic firewall systems. You can also access Wireguard, OpenVPN and Open Connect protocols.

You can also use Multi-Hop VPN to route your connection through one server and out another. Port forwarding and Onion over VPN.

Astrill is pricey, pretty much the same as ExpressVPN, with a yearly plan starting at $8.33 per month. But you are getting what you pay for. A highly secure VPN which is specifically customised for maximum security and anonymity.

VyprVPN like Astrill is one of the few companies that has come out with their own proprietary software to help overcome the China Firewall’s detection of most security protocols.

For many years their Chameleon protocol worked like a treat until 2018, and since then there has been a bit of back and forth with their service being blocked, then their protocols being adjusted and working again. But VyprVPN has consistently stayed on top of updates and keeps changing and evolving. Remember that over time every VPN gets blocked, it’s more a case of how they respond to this that is important.

Their application also lets you connect to less secure protocols, offers VPN tunnelling to send some of your applications traffic through unencrypted. As well as a 3-day free trial.

They offer 700+ servers in 70+ countries. We should add that they do keep minimal logs of their users, which they openly say. So, if you think you need a service that doesn’t log you may be better off elsewhere. Also due to restrictions by Apple, you won’t be able to use VyprVPN on iOS. But this is only the case if you try and download it in country. In 2017 Apple dropped hundreds of VPN apps from its stores after a Chinese government crackdown. As they didn’t want to run the risk of getting the App Store banned as well.

VyprVPN are also one of the few companies like ExpressVPN that own their entire infrastructure including their DNS servers. Prices start from as little as $6.67 per month, allowing you to access 5 devices simultaneously.