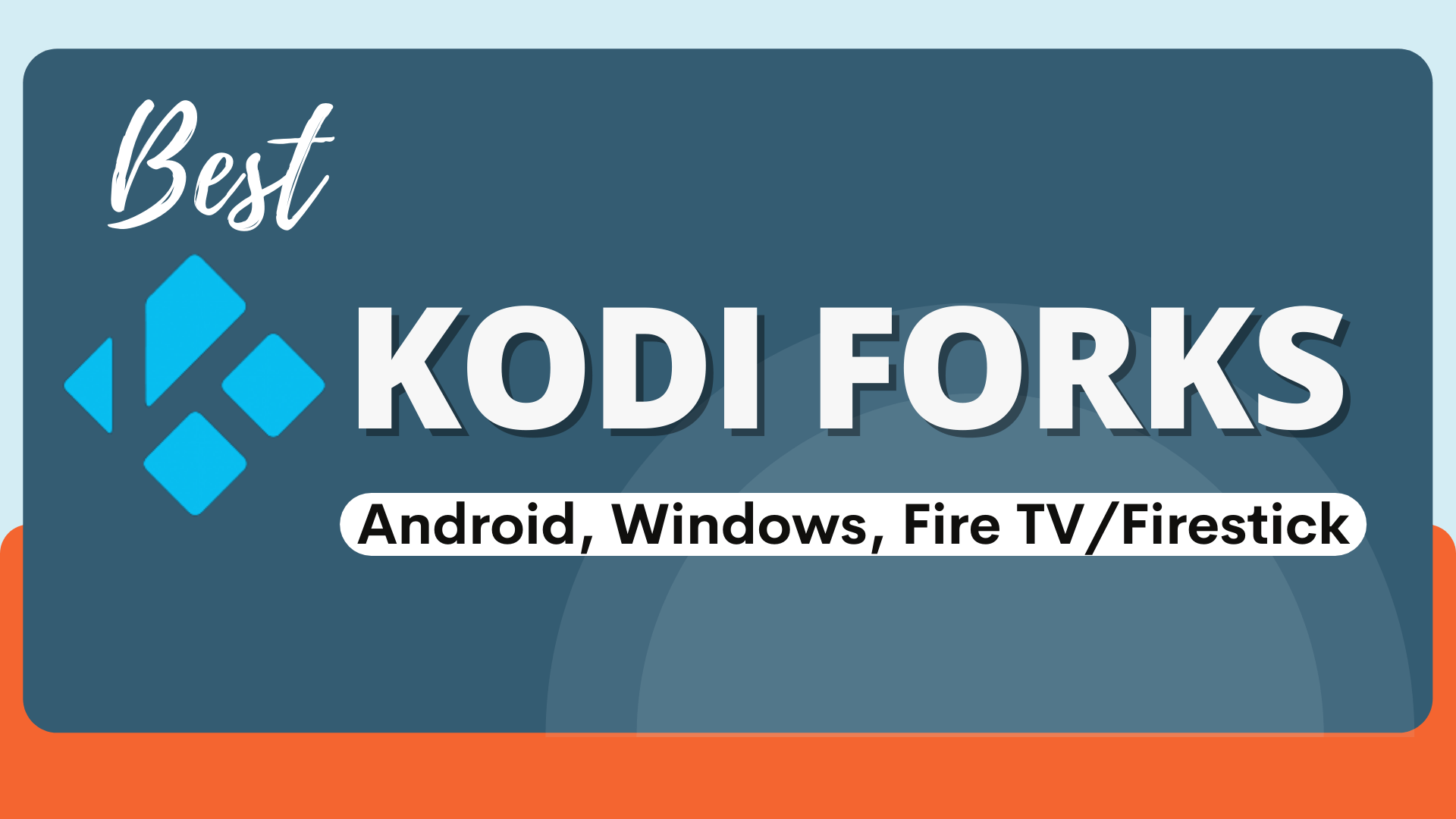 However, there are still lots of Kodi forks. The forks for the media player app are its modified versions. Developers created forks when they felt the urge to add extra features and personalize the look & feel of the user interface of Kodi. Kodi is an amazing media player software app, which is the reason there are tons of Kodi forks available today.

MyGica is one of the best Kodi forks for Android. It was designed particularly for users of Android 4.4.2 KitKat (an operating system for mobile phones & tablets). This Kodi fork allows you to stream all types of content free of charge. The app comes with a user interface like Kodi. It allows you to watch TV shows, view picture slideshows, and play music. Nonetheless, MyGica provides handy customization options that include installing any Kodi addons as well as the ability to change skin.

EBMC, eBox MC, or eBox Media Center is a well-known Kodi fork for Android. EBMC comes with lots of changes, features, and tweaks that are available on the official Kodi 17.3 Krypton. Nonetheless, by default, this Kodi fork uses the confluence skin. eBox Media Center is a lightweight and stable fork. It functions just like Kodi as it allows users to play media files from their local drive. Additionally, users can even add lots of wizards that come with add-ons and watch them on the web.

Nodi is a great Kodi fork you can use for Android. It can serve as a good MyGica alternative. This Kodi fork allows you to install Kodi 17 Krypton on Android-powered devices that run on Android KitKat 4.4. It has an amazing graphical user interface. Nonetheless, it comes with a handy search feature as well as an option to establish weather info. In addition, Nodi lets you play music and install third-party add-ons to allow you to watch TV shows free of charge.

There are tons of Kodi forks available for Windows. However, the one most widely recognized among all Kodi forks is DVDFab Media Player. This Kodi fork is more recognized for its cross-platform feature. Not only DVDFab Media Player is available on Windows but you can also use it on the Android platform. It got tons of support from users of Kodi 17.3 forks as well as Kodi 17.4 forks. Nonetheless, this Kodi fork has secured a spot among the well-known Kodi 17.6 forks, making it one of the most amazing & promising Kodi forks.

SPMC or Semper media center is an unofficial but good Kodi fork for the Android platform. It was designed by Koying – a previous member of the development team of Kodi. One of this Kodi fork’s unique attributes is the voice-to-text search. However, SPMC has evolved into an obvious choice for the Nvidia Shield.

Nonetheless, if Kodi is providing you problems or just will not function, then SPMC or Semper media center should be your option. This Kodi fork comes with various fixes and useful settings to allow you to watch media contents easily.

Kato Kodi Krypton Fork is an amazing Kodi fork. This Kodi fork is both a Kodi 17 and Kodi 16 fork. Nonetheless, it has one of the huge community support. Additionally, in case you need anything the community support is your solution.

LibreELEC is a great Kodi fork that you can use on the Windows platform. However, you need an SD card or memory card to kick off this Kodi fork. The accessibility of LibreELEC is like Kodi. Additionally, you can add it to the official Kodi app.

Among all the Kodi Forks, Xbian is one of the fastest Kodi forks. Xbian is a very flexible Kodi fork that consumes a little space on the internal storage. However, one of the amazing things is that Xbian was initially designed for Raspberry Pi but now you can use it on the Windows OS.

FireMC is a well-known Kodi Fork that works well on Amazon Firestick. Aside from Firestick, FireMC also functions well on Android TV boxes, mobile phones, & tablets. However, this Kodi is customizable and particularly aims at Kodi 17.3.

STVMC is an amazing Kodi fork from the developer of a popular  Kodi add-on – Spinz TV. Tons of individuals are aware of this well-known developer due to its popular add-on on Kodi’s original Media Player. Nonetheless, there is no doubt that STVMC is one of the most famous Kodi forks and thus comes with great support.

Jesus Box is among the most supported forks for Kodi. It provides a number of weeks of technical support and ensures lifetime updates. However, this Kodi fork is a great choice to consider if you want to replace Kodi from Amazon FireStick. Jesus Box provides you an experience just like Kodi Krypton 17.6, thus, it is an ideal Kodi 17.6 Fork.

Terrarium is among the best Kodi add-on you can use for streaming your favorite media content. Tons of video streamers are aware of Terrarium and thus its developers expanded their vision and launched a Kodi Fork. However, it is a software app that has the capabilities of doing all the functions that Kodi implements for entertainment.

Nonetheless, Terrarium TV has piracy concerns, thus it is highly advised to use a Virtual Private Network or VPN while utilizing this Kodi fork. It is an app that works like Kodi and you can use it for entertainment.

Open Source Media Center or OSMC for short, is among the best Kodi Linux Forks. It is a media center with tons of features. Thus, users will surely obtain amazing services. Nonetheless, Linux users are distinct and it is hard for Linux users to watch whatever they want via numerous applications. Whereas, other platform users do not encounter such issues.

OpenELEC is a great media center. It is an open-source tool. This Kodi Fork comes useful for individuals who love to stream entertainment content. This Kodi Fork is programmed on Linux. Nonetheless, tons of streaming experts claim that it is more innovative compared to Kodi VPN. In addition, a lot of users choose OpenELEC as their best-loved Kodi Fork.

OpenPHT is an astounding Kodi Fork for users of RasPlex. It is not just a typical Kodi Fork, but it’s also a great RasPlex alternative. Nonetheless, this Kodi Fork is compatible with numerous platforms. You can install this Kodi Fork on Linux, Windows, & Mac.

RasPlex is a great Kodi Fork for users of Raspberry Pi. Raspberry Pi users can enjoy all their streams on their devices. However, this Kodi fork is Kodi’s modified version that provides an amazing experience.

After Amazon detached Kodi from its App Store, tons of alternatives have joined. MrMc is among those alternatives and while it is available on the App Store, it has a great reputation. This Kodi fork is Kodi’s modified version. However, MrMc is open-source and works well with numerous devices. Furthermore, this Kodi fork has a 10-foot UI for TV as well as video players.

Community Edition Media Center or CEMC is an awesome Kodi Fork that you can install with Kodi without issues. CEMC is an open-source Kodi fork that has become popular. Its developers ensure that there’ll be no issues. Wherein, you should try this Kodi fork at least once.

ZDMC is an impressive Kodi fork. This Kodi fork is from the Zidoo Builders and it specifically aims at RK3368 chips. Nonetheless, ZDMC comes with a number of fixes and provides external media player support. You can easily utilize ZDMC to watch movies & TV shows, view photo slideshows, and listen to music. This Kodi fork is reliable & stable. Additionally, ZDMC brings useful features to help you stream entertainment content on your phone particularly if Kodi will have issues.

WeTek Media Player is a splendid media center that takes a user’s experience to another level. This media center is among the best Kodi Forks. Both WeTek boxes & software are exactly like Kodi.

This media player is a sort of a Kodi rebrand. It is among the best Kodi forks that are rooted in Jarvis’ code. This media player provides various Amlogic solutions and extra patches. It enhances the user experience on Android-powered devices. Nonetheless, the media player comes with a classic UI – user interface.  Additionally, the WeTek media player contains several Settings Options that users can tinker with to improve their TV shows as well as a musical experience.

Always Use a VPN To Stay Safe, Secure Online

Always remember to use a good Virtual Private Network or VPN for your personal safety, anonymity, and encryption on the internet. Even though Kodi is a stand-alone media player software app, the addons you install via builds mostly get famous websites to obtain the streaming links. As a result, your Internet Service Provider (ISP), government, or hackers can monitor all your streaming activities.

Not only ISPs can obtain and sell browsing data, but they can also give that information to third parties. Wherein, you’ll have unsecured streaming activities from Kodi builds if you’re not using a VPN.

However, IPVanish is the best VPN for individuals who want fast streaming on their Fire TV Stick. After you have installed the IPVanish app, there is nothing stopping you from streaming the best High Definition videos & high-quality music available online. The network will be fast enough and will not give you issues even when streaming 4K videos.

Yes, you can download, install, & use Kodi Forks safely.

Does Kodi Forks come with issues?

Some Kodi Forks do come with issues.

In this article, we have provided information on the Best Kodi Forks. The information above should help you enhance your Kodi experience.

Nonetheless, always remember to utilize A VPN service every time you use the internet. If you have any thoughts, suggestions about this article, don’t hesitate to let us know in the comments section.