TunnelBear Review – Are They The Best VPN in 2020?

TunnelBear is a popular VPN service based out of Canada. This means they are part of the 5 eyes and greater 14 eyes. We are ReviewVPN take this with a grain of salt though and prefer to focus our TunnelBear review on their real-world performance when it comes to the quality of their software, encryption, privacy record, and speed.

They are now part of the greater McAfee antivirus company. While their marketing remains totally awesome, we’ve seen a distinct decline in the emphasis on the product since they have been acquired by their much larger parent company. Speeds are still good, but if you are a hardcore VPN user you should definitely check out the likes of IPVanish, NordVPN, and ExpressVPN for the ultimate VPN experience.

The plans in TunnelBear are available in the following prices:

Reasonable pricing especially in the yearly plan which is way cheaper compared to the amount billed monthly in the monthly plan. Furthermore, with the existence of the free plan which gives the subscribers access to the service for free though it is limited to only 500 MB of data per month, prospective subscribers can test TunnelBear prior to purchasing one of the available plans.

Frequently Asked Questions
What does it cost?
Prices start at $4.99 / mo
How many servers are there?
20+ server locations
What apps are there?
Windows PC, Mac, iPhone/iPad, Android
Are there logs?
Zero logs are kept
What protocols exist?
OpenVPN IKEv2
Is there a trial?
30-day money-back guarantee 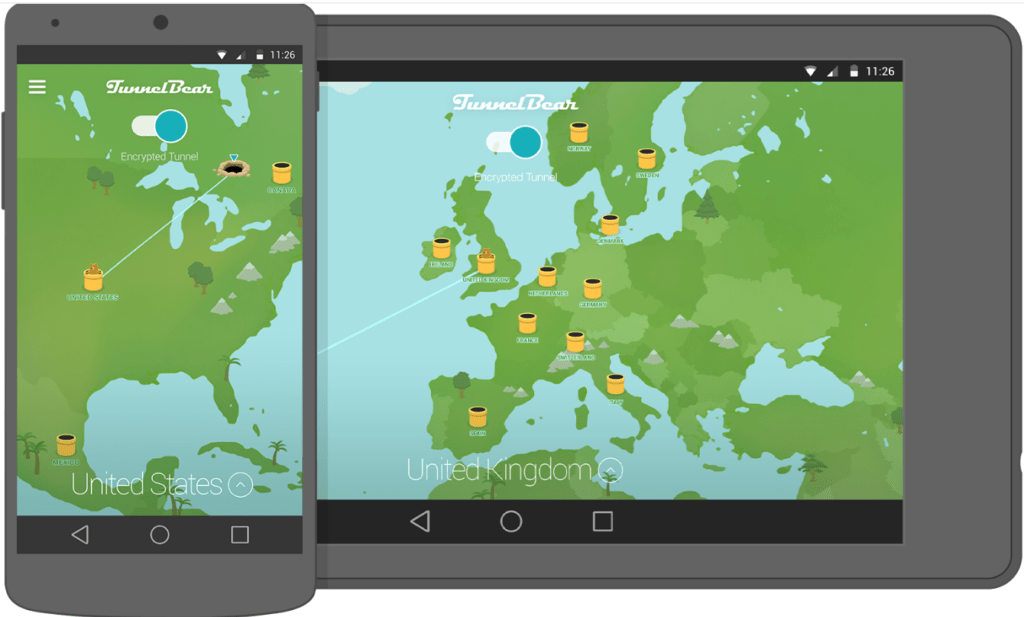 TunnelBear keeps very little log monthly with lucid privacy policy; no data about the user’s activity or IP address is logged. The purpose of the data that is requested from the user is made clear to the user. TunnelBear has built-in modes such as the VigilantBear a termination switch that prevents the information from being spilled off the VPN tunnel if there exists a connection drop in the VPN; this prevents unencrypted web traffic from spilling to your internet service provider securing the users’ privacy.

With TunnelBear’s recent support of P2P, its service allows Torrenting.

Streaming on Kodi while connected to a TunnelBear VPN server is not really smooth, having issues with buffering.

Tor means The Onion Router which serves as an encrypted web browser. The use of a VPN alongside TOR increases the user’s anonymity. While a number of VPNs do not allow the use of this service TunnelBear supports the service this coming with decreased speeds while using it.

GeoIP is simply a technique of finding a work station’s geographic area by recognizing the terminal’s IP address. With some websites blocking their GeoIP contents in other to restrain access from specific locations, VPN which is an encrypted passage through the internet can be used to change one’s server making the user appear to be in a country or location where the user is not. It has GhostBear which is TunnelBear’s VPN obscurity innovation (otherwise called ‘stealth mode’.) It camouflages OpenVPN traffic to help individuals get around firewalls. It does this by executing obfsproxy. This makes VPN encryption less noticeable by governments, ISPs, and organizations – by influencing it to appear as though typical HTTPS traffic. Leaving GhostBear incapacitated doesn’t generally make you less secure. In any case, it is an astounding additional component for individuals that need to mask their VPN use. Stealth mode additionally stops bandwidth throttling by the ISP in spots where there is OpenVPN throttled traffic. In principle, GhostBear can hinder your internet traffic. Thus, it is presumably better possibly to utilize this component on the off chance that you really require it. For every other person, the User Datagram Protocol used with standard OpenVPN gives the quickest speeds.

Speed is of great interest to the customers, though the speed should not be the yardstick for the choice of a VPN service because VPN’s usually have an effect on the browsing speed due to the addition of extra loops for the service to go through. TunnelBear has high upload and download speed surpassing a number of popular VPN providers, providing good enough speed when streaming HD videos.

With regard to encryption, TunnelBear gives access to two diverse protocols for VPN. The Android Windows, and Mac OS customers all execute OpenVPN. iOS VPN clients get the decision of either Layer 2 Tunneling Protocol (L2TP)/Internet Protocol Security (IPsec) or Internet Key Exchange rendition 2 (IKEv2). In that capacity, anyone wishing to connect by means of OpenVPN on iOS should do as such utilizing the third-party OpenVPN Connect software.

Solid 256-piece Advanced Encryption Standard (AES) encryption with SHA256 authentication is utilized over the platforms, aside from iOS 8 and prior (which is encrypted with 128-bit AES encryption and utilizations SHA-1 for information authentication). This data is accessible on TunnelBear’s blog, which is an incredible dimension of straightforwardness. Additional positivity, TunnelBear does not give Point-to-Point Tunneling Protocol (PPTP) – an outdated type of VPN encryption that is presently viewed as insecure.

Notwithstanding solid encryption and a solid privacy strategy, not so long ago TunnelBear put resources into a third-party review. That proficient security review grants TunnelBear to unhesitatingly promote the privacy and security given by its stage. It likewise fills in as proof of the security and privacy guarantees that TunnelBear makes. It is additionally significant that TunnelBear has recently launched two updated versions for issues relating to IP leaking. These upgrades stop IPv6 leaks and IP leaks when organize connectors are reconfigured, these fixes are available to windows and Mac OS users.

TunnelBear has a committed Help page that can be found in the little menu at the base of any page. This asset comprises of information in regards to “Status Updates”, “Getting Started”, “Accounts and Payments”, “Brower Extension Help”, “Windows App Help”, “Mac OS X App Help”, “iOS App Help”, and “Android App Help”. These articles can be effectively discovered utilizing the page’s inquiry catch.

For anyone that can’t discover an answer on TunnelBear’s assistance page, it is conceivable to contact TunnelBear legitimately. Tragically, the firm doesn’t have a live chat include, so you should utilize the online contact structure. Subscribers and non-subscribers can utilize this component to pose inquiries about the administration. Not the best customer support on the planet, yet unquestionably not awful either.

TunnelBear is situated in Canada it is liable to some truly obtrusive laws. This is long from perfect since Canada is popular for its Five Eyes Treaty and Canada have been observed to snoop on citizens a few times recently.

TunnelBear VPN has over 1800 servers across 23 locations which are quite limited. Delivering one of the best VPN services.

TunnelBear is a tricky VPN to review. They have a good interface and are easy to use. Having a free plan allows prospective users to test the service before purchasing a plan. However, their lack of servers and the fact that they are now part of a much larger company that seems to have de-emphasized the product makes us think that you can do better with a different VPN service.