We feel lucky to be able to review Cyberghost today. It is truly an awesome service in many respects. First, it is dirt cheap if you are willing to buy 3 years at a time. Second, it offers an absurdly long 45 day money back guarantee. Finally, it is without a doubt our favorite VPN for unblocking US and UK Netflix.

Cyberghost has been around for years and started as a small Romanian company with an emphasis on a freemium model. While Cyberghost has outgrown those roots, most of the changes have been for the better.

Cyberghost pricing reminds us of NordVPN. They push customers for long term packages by offering a high price when paying monthly and a very low price when you buy several years at a time. The prices are pretty meh until you get to at least a two year package. Of course, at only 11 dollars more for the third year, we strongly suspect sales of the 2 year plan are quite small.

On its longer packages from 1 year up, Cyberghost also offer a 45-day money back guarantee, one upping the competition who use the industry standard of a 30-day money back guarantee. The yearly plans, particularly the 3-year plans are very cheap. At $2.75 a month they are pretty much matching NordVPN pound for pound who is their biggest competitor. BTW, Nord charges $2.99 a month for a 3 year plan.

Frequently Asked Questions
What does it cost?
Prices start at $2.75 / mo
How many servers are there?
4000 servers in 55+ countries
What apps are there?
Windows, Mac, iOS, Android, Linux, Routers
Are there logs?
Zero logs are kept
What protocols exist?
OpenVPN, L2TP-IPsec and PPTP
Is there a trial?
45-day money back guarantee

The Cyberghost software starts in a very compact form. 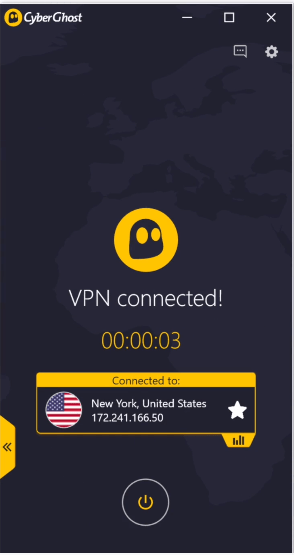 It expands into a very robust client. We especially like the options for streaming and torrenting. They specifically highlight the best servers to use for all the most popular streaming services. This is a huge benefit versus their competitors. ExpressVPN makes you message support. Most companies make you guess until you can find a good server. If you are a searching for a geographically focused VPN service, you might have found your match. 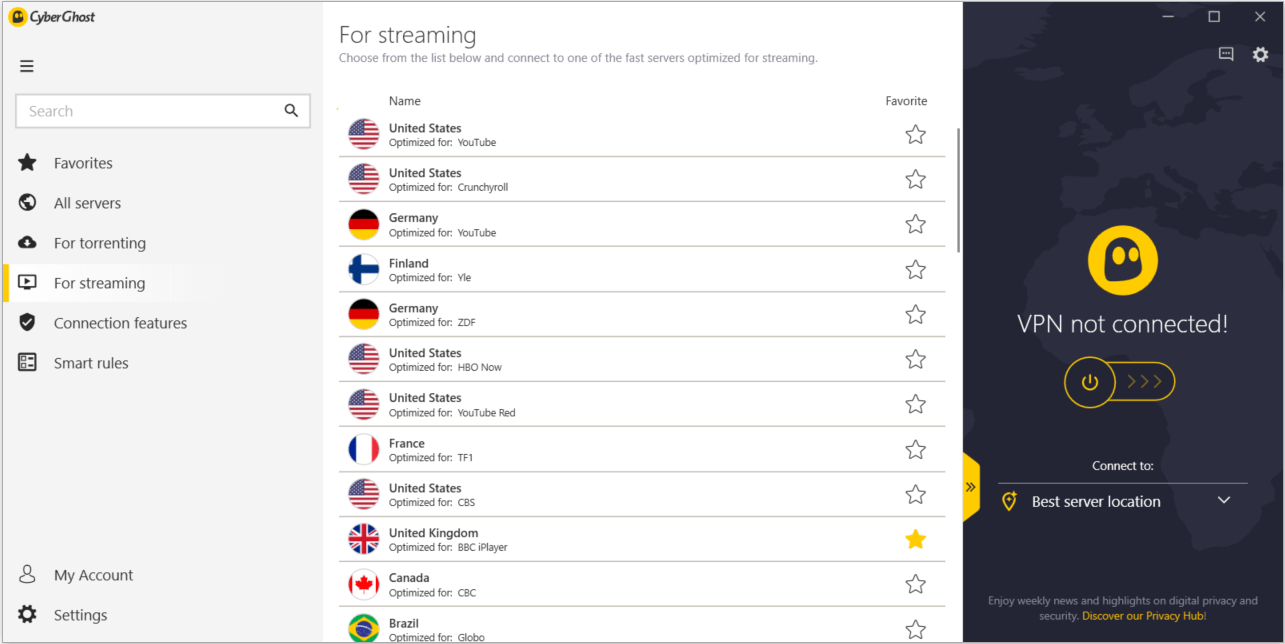 Cyberghost has a clear no logs policy. They explicitly state that they keep none of your data. They also provide data of how many DMCA (Digital Millennium Copyright Act), Malware activity flags and police requests it has received in recent years. Though the latest figures are only from 2016.

We like companies who are this transparent about their data.

Cyberghost doesn’t make any explicit mention of using torrents on their site, but their website is jam packed with useful content on torrenting.

However, with access to the highest possible speed servers, unlimited bandwidth and traffic, as well as the option to connect to 7 devices through your VPN, this provider is a good choice for torrents. They also highlight specific servers for torrents within their software. This is a huge plus.

Plus, with the number of DMCA requests they have received in past years, we guess this is the first port of call for many major torrenters. They show stats for 2015 through 2018. During that period, they had over 100,000 DMCA requests.

Additionally, you also have access to a malicious URL filter, which allows you to sift through malware sites which may attack your computer with viruses and infected torrents.

Kodi is the best source for multimedia anywhere online. Using Kodi gives users access to thousands of movies, sporting events, TV shows and live channels from across the globe. Using a VPN provider means that you can circumvent geographic restrictions on content and stream privately.

Cyberghost is the only VPN provider we have seen give specific steps to access big sporting events, like the recent Champion’s League Final has its own dedicated page and guide. Their site provides a series of in-depth guides to help you get connected and get the best out of Kodi.

As we previously mentioned, the Cyberghost software is perfect for streaming Netflix. They don’t have all regions, but they do highlight the ones that most people are interested in (US and UK). They also offer an excellent app for the firestick, which makes it even easier to stream to your hearts content.

Cyberghost goes one step further in its client by highlighting the best locations and servers to stream services.

The gold standard is being able to access Netflix USA and YouTube, which Cyberghost does with apparent ease.

Again, there is no explicit mention of the Tor, and a quick search of their help articles will lead you to easy to follow guides about how to use the Onion with Cyberghost.

They make a point of saying with 256-bit AES encryption it’s not necessary, but the software is compatible if you want to be sure.

Cyberghost registered some of the fastest speeds around when it came to connection. Registering 90-100MBps in the US and 50-60 MB in Europe.

There were some slow downs in more remote countries like Chile and Indonesia. But that must be tempered by the fact that some countries simply don’t have great connections, and of course speeds are always limited by your own broadband speeds.

In short, expect good enough speeds to stream and torrent with ease from most countries.

Cyberghost offers the highest encryption available starting off with 256-bit AES which is military grade. They also use native IKEv2 encryption methods which is recognized as the best security protocols you can currently use to secure your data.

One thing we really like as well, is the host of additional security features, such as ad blocking, malware protection and black and white listing.

We were so impressed with Cyberghost’s enormous selection of articles and help guides for a wide variety of problems. They helped tremendously both with this review and using the service overall. You can also submit a form or use live chat and speak to an agent within a matter of minutes.

Based in Bucharest in Romania, the company is not beholden to anyone to maintain logs or co-operate with law enforcement agencies from any country.

The web platform works with Windows, Linux or iOS and they also have a simplified and easy to use mobile application.

Final Thoughts on the Cyberghost Review

There is a lot to be impressed about with Cyberghost. We are seeing a trend towards VPN providers pushing boundaries into ad-blocking and malware protection which can really speed up your browsing connection and minimise distractions.

For the price alone Cyberghost is worth a try. After all, you get a whopping 45 day money back guarantee policy with longer term plans. The solid software, big team, masses of help guides all points towards a slick operation.

We can understand why 30 million people trust Cyberghost with their privacy.