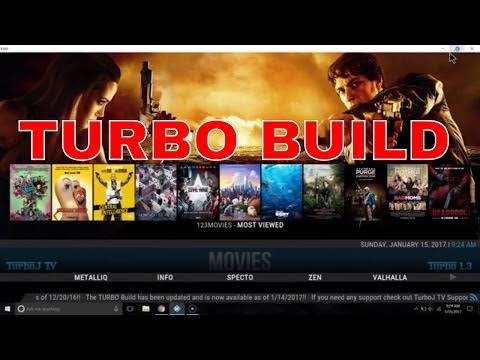 Turbo Build has been making waves since 2017. With an intuitive and easy-to-use interface, as well as a wide-ranged of updated add ons. It has been a Kodi fan favorite for years.

If you haven’t heard of Kodi then you are in for a treat. A 100% free and legal piece of software that can turn your TV into an all in one entertainment center. Store any form of media, watch Live TV, stream movies and listen to music. Kodi opens the door to allow almost any form of media to be played through your big screen TV.

Originally designed in 2002, the software is now on its 18th version and still going strong after 17 years. Run by a dedicated team of developers who work for the XMBC Foundation, Kodi has gone from being a niche program just for the Xbox to one of the most downloaded pieces of software for media playing. Numbering in the tens of millions.

As well as its official library, Kodi has an extensive library of unknown source third party add ons numbering in the thousands. Allowing you to watch the latest movies, TV shows and stream live TV all completely free.

When using Kodi you could spend hours trawling Google for the 50 best add ons and downloading them one by one.

Or you could just save yourself the time and download one build which comes with all the add ons built-in.

A Build is a pre-programmed package of add ons, skins, features an electronic programming schedules which makes it easy for you to get started on Kodi, without the pain of hours of handpicking each feature and add on.

What is Turbo Kodi Build?

Turbo Build comes from the Turbo JTV repository and ranks as being one of the smaller builds on Kodi coming in at 260MB. Great for lightweight devices or those with little RAM like the Amazon Fire Stick.

Add ons included in this build including:

How to Install Turbo Kodi Build

Stick to the following simple steps to install Turbo Build:

We love using a VPN for anything we do online, not just Kodi or Turbo Build in particular for a number of reasons:

Turbo Builds is one of the older Wizards around. At 2 years old it’s well respected and has been stable for most of that time.

As one of the older builds your biggest danger would be downloading it from an unofficial repository. Avoid other servers and hosts at all costs and always scan your file with a professional Malware scanner if you have any doubts.

Turbo Build provides a wide range of add ons which allow you to access content that hasn’t been legally distributed.

Though the add ons do not host the files themselves, you use it in the full knowledge that the content falls into a grey area.

We strongly advise you use Turbo Build and anything on Kodi with a VPN active.

Turbo Build is one the oldest Wizards around, released in 2017

Turbo Build covers a lot of what we would want in a great build, luckily there are plenty of great alternatives:

In the unlikely case that all these builds are down at the same time, just turn to Google or Reddit to find the best working build or check our list of Best Kodi Builds.

Really versatile Build and has been going for a long time, got a good track record of getting rid of the bloat in updates and keeping only working add ons. A solid build that suits beginners using an Amazon Fire Stick.