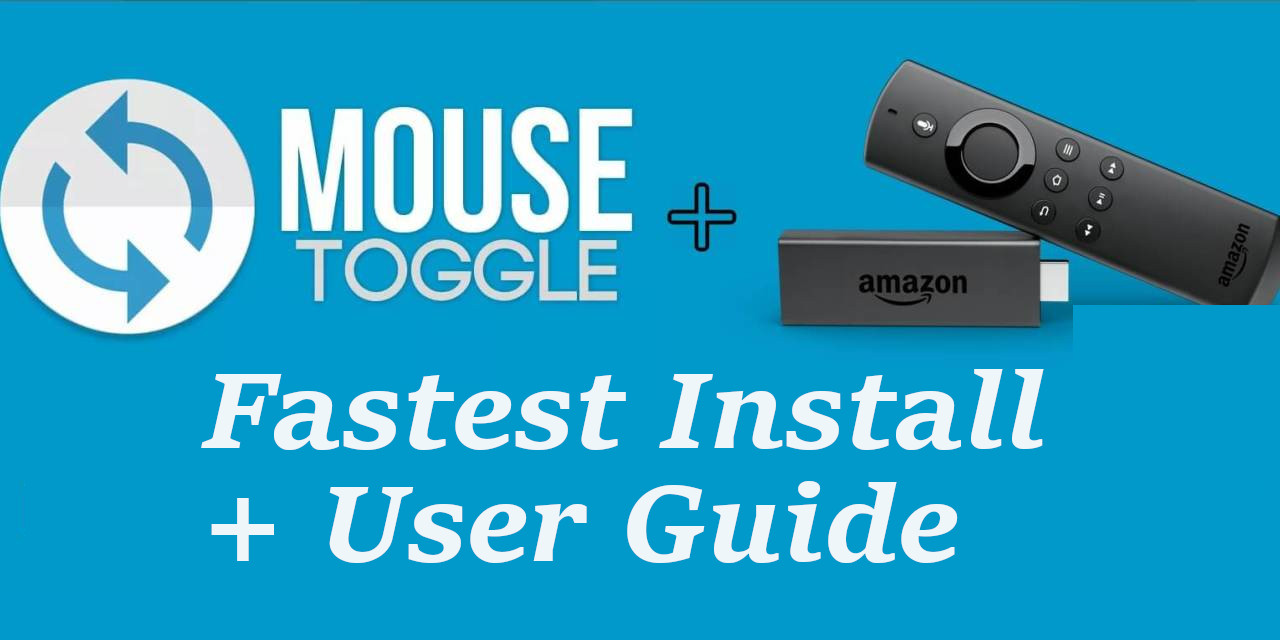 What is Mouse Toggle?

One of the most underrated pieces of hardware on any computer is your mouse. A mouse pointer helps you quickly and easily navigate across a myriad of options. I mean can you imagine having to tab through Amazon on your keyboard.

Some of the best Android TV streaming applications have been specially designed for touch screens. This is great on a tablet or phone but can become frustrating when using it on a TV. Without the touch function, you either have to click through each successive button or find a replacement for a mouse.

This is the void that Mouse Toggle helps fill. Mouse Toggle allows your Fire TV remote to act as a wireless mouse to a better level of accuracy than any other application currently on the market.

With over 50K downloads on Google Play and an average rating of 3.9/5.

2. Scroll down and to the right until you can click on My Fire TV

4. Turn on ADB debugging and Apps from Unknown Sources

5. When you turn on Apps from Unknown Sources a popup will appear. click turn on

6. Click the home button on your remote and scroll once to the left to the search magnifying glass

7. Either say Downloader to your Alexa voice-enabled remote or start typing it. Once the suggestion appears, click on it

13. Type “reviewvpn.com/mouse” in the browser window and click Go (we do not host this file. we have merely setup a redirect)

15. On the Mouse Toggle screen wait until you see Status changed to started before trying to use the app

16. A popup should appear that asks if you want to allow USB debugging. Check the box that says always allow and click ok

How to Use Mouse Toggle?

Video on How to Install Mouse Toggle on a Firestick

Where Is It Available?

In addition to the method we have just shown, you can also download Mouse Toggle from the Google Play Store. This will require you to download the app and then push it from your Android device to the Firestick.

You can read more about Mouse Toggle, at their official website

Like any other popular software make sure to only use the official website or a trusted provider. Many malicious parties will use similar name websites to give you access to files that may be infected with malware. There are many antivirus programs available for Android that will allow you to scan the app if you get it from an unknown source. Bitdefender is both free and well respected.

What Features Does It Have?

How Do You Use It?

Download the App on your phone and then sync with your Android device.

Cetus Play is free with ads, and for $3 you can pay for the premium app and remove ads from the device.

When Was It Developed?

What Tools Does it Compliment the Most?

Most Android TV application has been developed for touch screen and therefore don’t have the user interface for remote controls.

We’ve found that browsers not intended for the Firestick, like Chrome, Opera, and Microsoft Edge, require Mouse Toggle to work. Also, many of the best live TV apps require Mouse Toggle. There are also a variety of applications that can work without it but work better with it. ES File Explorer is one that falls into this category. This is particularly true when trying to close windows.

The app has been going for a long time, and in 2016 and 2017 the developer would normally respond to comments directly.

However, when we took a closer look at the reviews from 2019 the app seems to be going downhill. The majority of users have it 1 star and said they were having problems getting it to work on their device.

It’s possible that if the developer has moved onto other applications that Mouse Toggle may need updating to allow it to work on newer devices and applications.

There seemed to be a lot of problems with the application not getting past the start screen, also for people using Fire TV (3rd gen UHD) you’ll need to reduce the resolution on your Fire TV Display setting from UHD (3840) down to 1080p. Which defeats the main reason for using a UHD device. Also, if the status for Mouse Toggle is stuck on ‘starting’ you need to run Mouse Toggle on your phone (or other devices) and run ‘troubleshoot’ and restart the service.

History / Is it in active development?

Mouse Toggle has been active since 2016, but there have been no updates since June 2018, from the reviews it seems like the app could really do with an update or the ratings may start to fall.

Much of the negative reviews have come over the past year as people report problems with functionality.

What Devices Does it Work On?

Cetus Play is probably the best alternative, though it doesn’t offer the same refinement for mouse toggle functions but is reasonably accurate, you also get a heap of other functionality including:

What Apps Does it Compliment/are Required to Use It?