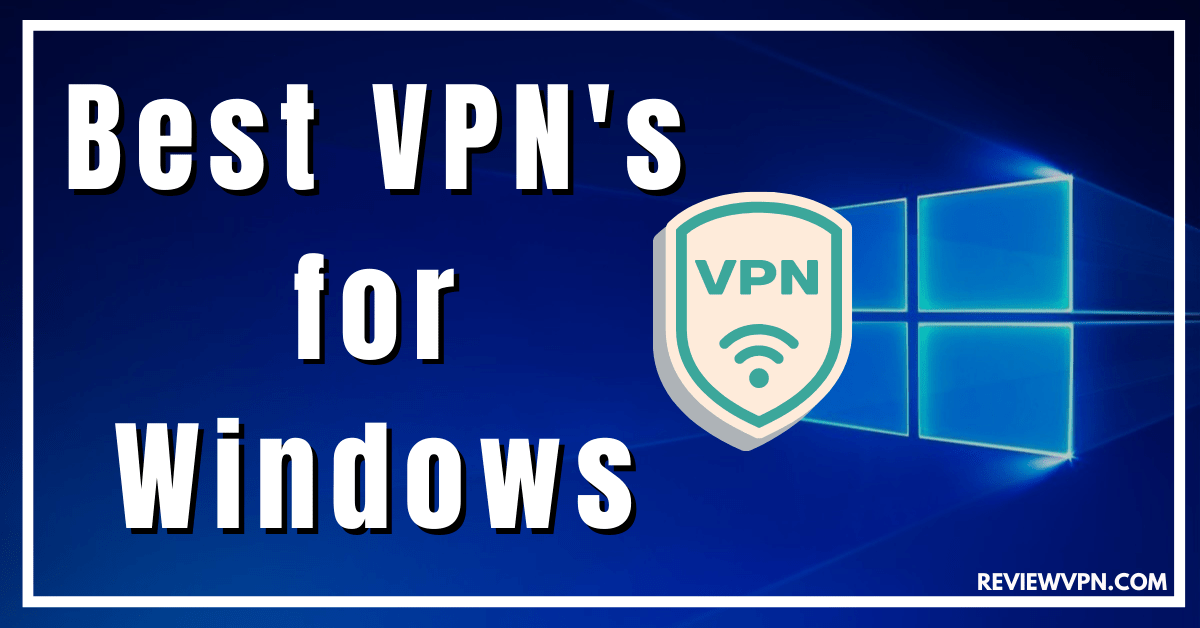 In this article, I’ll be listing down the best VPNs for Windows.

The VPN market has seen unprecedented growth in the last decade. This is due to the growing number of threats to our online data daily. Internet users now have to contend with surveillance, censorship, and cybercrime and in such situations, it makes sense to use a VPN when you’re online.

However, the VPN marketplace can be quite confusing for newcomers. With so many options available today, knowing which one is the best VPN for Windows can be a challenge. Fortunately, VPNs for Windows are some of the best on the market.

They provide fast speeds, high-quality encryption, and easy-to-use software. Most importantly, they come with a 30- to 45-day money-back guarantee, so you can always get your money back if you are not satisfied with their service. VPNs are also recommended for Windows since they protect you from phishing scams, browser malware, and cyberattacks, as well as online privacy concerns.

What Makes a VPN Good for Windows

When evaluating the best VPNs for Windows, we pay close attention to the following:

IPVanish is a great Virtual Private Network that has everything you need. It has strong encryption for a secure browsing experience, a no-logs policy, unlimited connections, and a large server network, lightning-fast servers, and affordable prices. All of these features combine to make it the ideal tool for safeguarding your online privacy and unblocking geo-restricted websites from anywhere in the world. It has servers in the United States, the United Kingdom, the Netherlands, France, Sweden, Romania, the Czech Republic, Canada, and other countries.

Country of Origin: US

Pros and Cons of IPVanish

One of the best things about ExpressVPN is that it works well with just about any platform. Whether you want to use it on your Windows PC, Mac, Android phone, iPhone, or even a router, ExpressVPN has got you covered. It is a fast and highly secure VPN service with plenty of great features. With over 3,000 servers in 94 countries supporting OpenVPN, L2TP/IPsec, and PPTP protocols, your data is encrypted from end to end. It also comes with a 30-day money-back guarantee, allowing you to test it out without risk.

Simultaneous connections: Up to 5 devices

Pros and Cons of ExpressVPN

Some VPNs are focused on privacy, while others are concerned with secure connections. NordVPN has figured out how to combine the two requirements, creating a secure network while also anonymizing your data. As a result, they’re an excellent VPN for Windows users who require complete anonymity when streaming copyrighted content over the internet. While they only have 5,400 servers in 59 countries, their network is fast and powerful, ensuring that you are never blocked when trying to access something on the Internet.

Pros and Cons of NordVPN

Currently, your IP 129.208.11.191 is visible to everyone and your Browser is being tracked by Advertisers & ISP Provider.

CyberGhost is one of the most efficient, user-friendly, and secure VPNs available for Windows. It is also one of the most widely used VPN services around the globe because it lets you access any website or apps which are blocked or restricted in your country for free.

The VPN service encrypts and secures all of your network connections with military-grade encryption so it is an easy-to-use extension that protects your online privacy. It prevents hackers and snoopers from monitoring your online activity while you browse, stream or download.

Safety and Security: Prevents all DNS, IPv6, and WebRTC leaks

Pros and Cons of CyberGhost

If you’re looking for a reliable VPN service, then you should consider Surfshark. It’s a competent and trustworthy VPN service created by a skilled team of programmers and security experts. The company has established itself as one of the top services available for obtaining data encryption whenever and wherever it is required. They have been able to provide several benefits to their customers by offering a robust network, excellent privacy and security, and compatibility with all platforms. As a result, it is safe and dependable to use VPN.

Pros and Cons of SurfShark

Private Internet Access, also known as PIA, is one of the most popular VPN services for Windows. It consistently tops the best VPN providers’ lists due to its no-logs policy and strong encryption. Private Internet Access keeps no logs on any of its users by running their private server network with more than 30,000 servers in 78 countries. They encrypt all communications with AES 256-bit encryption using the OpenVPN protocol, ensuring fast and secure web browsing.

Free VPN for Windows That You Might Want To Consider

Windscribe is a VPN service based in Toronto which provides free VPNs with 2GB monthly data for privacy and security. It stands out by providing multi-hop encryption on all its platforms, which means that when you use their VPN services, all of your traffic is encrypted at least twice, preventing ISPs from monitoring your behavior.

Protocols: OpenVPN, IKEv2, and WireGuard (including Stealth and WStunnel)

Number of Servers: 180 servers from 63 countries

Pros and Cons of Windscribe

What does a VPN for Windows do?

A virtual private network (VPN) is a tool that allows you to access restricted websites on your Windows devices while maintaining the privacy of your connection. It does this by creating a tunnel between your device and the VPN provider’s server, allowing you to surf freely without anyone knowing what site or search term you use.

Why do I need a VPN for my Windows?

When connecting to public wi-fi or hotspots, you’ll need to use a VPN to safeguard your data from the prying eyes of hackers and phishers. It’s also a simple, quick, and effective way to gain access to your favorite websites and apps while keeping your data safe and secure.

Is using a VPN for my Windows safe?

A VPN, in general, will help you in ensuring the security and safety of your Windows device, so it is safe.

VPN is legal in most countries, but for countries such as China, Iraq, Russia, and the United Arab Emirates, it is either a legal gray area or illegal.

Using a VPN service today is quite common because it provides total online anonymity by concealing your real IP address and other data, to protect you from online threats such as hackers and phishers. However, not all VPN services are the same, and some offer advanced capabilities that aren’t available in others. So, hopefully, this article was able to assist you in finding the best VPN that matches your needs for your Windows device.