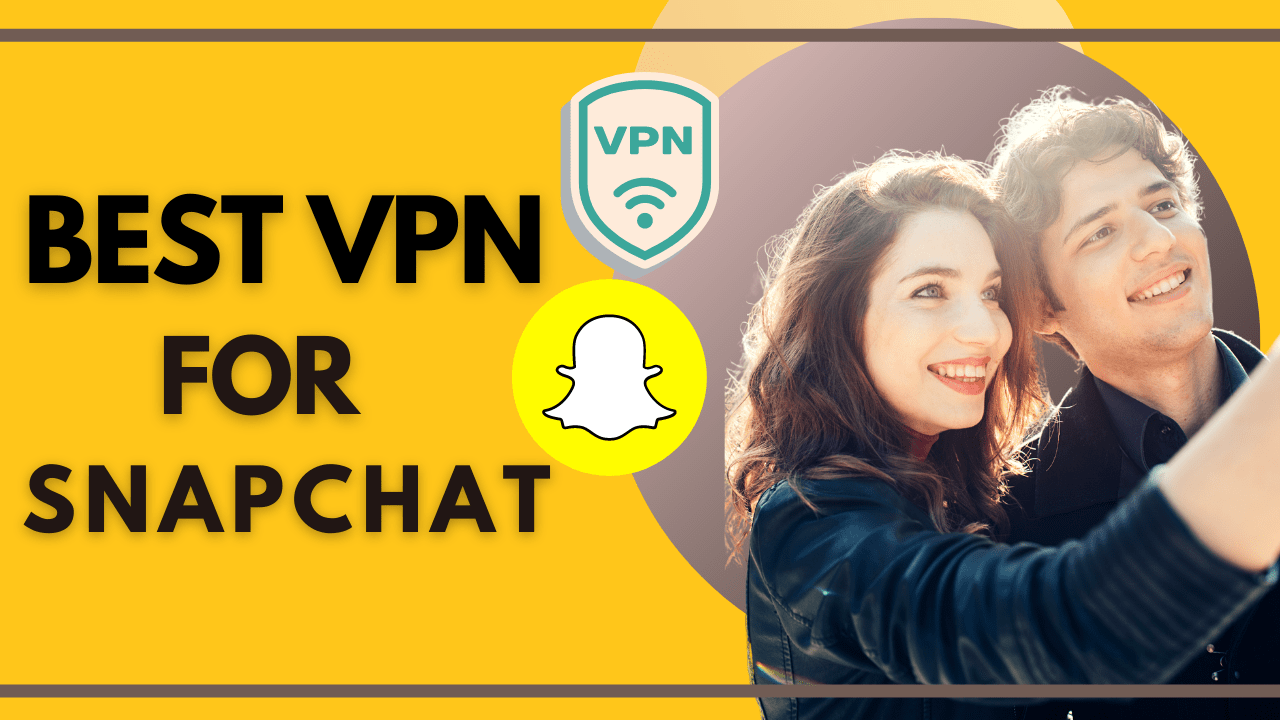 Every day, more than 200 million individuals are using the popular multimedia messaging app, Snapchat. Users can share videos & photos with friends & family, and add some fun with lenses, filters, as well as other effects. As innocent as it seems, Snapchat is frequently blocked. This article will go into the reasons for that later. However, one of the best VPNs (Virtual Private Network) for Snapchat will help you unblock the multimedia messaging app.

If you can’t open Snapchat and are eager to send your latest photo with added filters, it is recommended that you download a VPN app.

By using a VPN app, you’ll be able to avoid workplace, school, and even country blocks. Nonetheless, this article will go over what a person should look for in a VPN for Snapchat, why the multimedia messaging app gets blocked, and why using a free VPN for Snapchat is not always a good idea.

Choosing the Best VPN for Snapchat

There are tons of VPN providers to choose from, and they all appear to provide similar features, which makes opting for one a daunting task. Even though they look very similar, all VPN providers are not equal. Some VPN services are better in a single area while some excel in another. If you want a VPN service for a specific use, you should be aware of what you want to accomplish.

VPN services have been around for quite some time and people have used them to bypass restrictions or limitations for as long as they have existed. Wherein, the systems intended to block traffic has gotten smarter and will block VPN traffic. Nonetheless, there are methods around this, and some client applications are better at it compared to others.

Important Features To Look For

In general, there are a couple of important features you must consider when looking for a VPN provider for unblocking popular platforms, such as Snapchat:

The Best VPN for Snapchat

SurfShark is a cheap, privacy-focused VPN service that doesn’t log any data. It is excellent at unblocking popular platforms, such as YouTube & Snapchat, as well as geographically restricted streaming platforms like Netflix.

With SurfShark, 256-bit encryption will secure internet connections in combination with perfect forward secrecy. The VPN service offers a kill switch, protection against DNS & IPv6 & WebRTC leaks, split tunneling as well as automatic WiFi protection. This VPN service will help you if you need to avoid government blocks. Its apps are available for MacOS, Windows, iOS, Android, and Linux. Nonetheless, there is no limit on the devices you can link at a given time.

SurfShark won some awards since it gives us rare features not standard with existing VPNs. Users can easily change their settings to suit their preferences! SurfShark also provides us with the best apps while keeping its users safe.

We will now show you how to install the SurfShark app on your Firestick. Later on, we will show you why we like using SurfShark as a VPN.

SurfShark might be one of the few VPNs with extensive coverage of worldwide servers. Today, the SurfShark VPN has more than 3,200 servers in 65 different worldwide locations.

SurfShark VPN enhances your internet connection speed by connecting you to its servers. Aside from that, SurfShark provides you with unlimited bandwidth and data. SurfShark VPN boosts your internet speed to 71 Mbps. It is one of the fastest VPNs for watching online videos in HD.

Do you want to surf the net safely? Then SurfShark is the VPN for you! The SurfShark VPN has a Strict No-Logs Policy. The VPN’s headquarters is in the British Virgin Islands. They don’t have the legal right to expose user data logs to other parties.

The SurfShark VPN prioritizes User Privacy. All the apps and their past VPN versions always receive updates for keeping their features secure. We now have a reliable VPN to maintain our private activities.

P2P stands for Peer-to-Peer file-sharing activities. It is another term for downloading or uploading files with torrent networks. We suggest using a VPN while performing torrent downloads. Many cyber threats lurk in torrent sites, and downloading the wrong file can expose your system to malware or viruses.

IPVanish is a fast, easy-to-use, and cheap VPN service that incorporates sturdy encryption and ensures a perfect user experience.

With IPVanish, your internet activity can never be traced. It keeps zero logs so even its own employees will not know what you’re doing or browsing on the web. IPVanish provides an internet kill switch feature in your subscription. Wherein, there’s no loose flow of information or data if the internet connection drops.

The encryption standards of IPVanish are equally tight. IPVanish uses their original NordLynx protocol, OpenVPN, and IKeV2/IPSec. Wherein, even if your account is vulnerable for some reason, hackers can never decrypt past session information and open browsing history.

IPVanish service allows you to choose between 2,000 servers, and 40,000 IP addresses in 70+ locations to choose from. It supports six devices at the same time, making it a powerful VPN service for your family and friends. IPVanishalso offers apps for both iOS & Android.

The Romania-registered CyberGhost VPN service claims it doesn’t store any information or data. However, the VPN service was recently acquired by an Israeli company headquartered in the United Kingdom, so we will have to wait and see if the policy will not change.

Nonetheless, the encryption standards of the CyberGhost VPN service are robust. The VPN’s 256-bit AES encryption on the OpenVPN protocol is considered strong. With about 5,700 servers in 90 countries, there is enough option when it comes to concealing your location.

Fortunately for many Snapchat fanatics, there is a way to use the application. You can utilize a Virtual Private Network connection. A VPN provides an encrypted and secure web connection that you can set up to browse, surf, or stream. The word Private in the Virtual Private Network is very important here. A VPN service provides a very safe connection that doesn’t allow any form of hackers or spies. Thus, you should not be frightened that someone might access your personal data. All the web traffic for which you utilize a VPN connection could not be seen by others. No one can look into your internet activities, so you can continue using the Snapchat app without your employer or school monitoring.

Therefore, A VPN connection is some sort of firewall for your internet use, not for your computer or PC. A VPN connection does numerous things. First, it is going to encrypt all the web traffic from and to the Android device. Then, all web traffic will be tunneled via a secure connection so nobody can obtain your private data.

How Does VPN Work on Snapchat?

To establish a connection to a VPN network, first, connect to another public Wi-Fi network. After that, connect to the server of the VPN service. There are tons of VPN providers out there that offer monthly services. A huge advantage of these VPN services is that your IP address remains concealed because the web pages or platforms you visit are only seeing the VPN server’s IP address.

You can use a VPN server to utilize Snapchat in a location that blocks its services. If you can’t access the multimedia messaging app from your country, you may use a VPN network to access its features. Connecting with a VPN server will make it seem like you are using the web from a different region.

In the same way, you can set up a VPN connection with your Android-based mobile device. You only use the VPN app linked with your provider. From there, you can start using the Snapchat app in a couple of steps. Download the VPN app, connect to the VPN server and launch the app as you usually would. Now, you can share photos and videos again on Snapchat in a couple of seconds.

The primary reason why you would want to use a VPN for Snapchat is to bypass local restrictions. Snapchat, just like other social media platforms, could be time-consuming and kind of disruptive. As a result, numerous schools not only prohibit the use of Snapchat on campus but block it as well.

Public Wi-Fi access points and office environments frequently do the same to reduce the bandwidth usage of the internet. Nonetheless, with a VPN, all internet traffic is encrypted and the systems that normally block the Snapchat traffic will not even recognize it as such.

What’s the purpose of VPN on Snapchat?

A VPN service lets you overcome network restrictions by disguising your IP address with another location. With that done, you’ll appear to be no longer in school and any restrictions will fall away, and you’ll be able to access websites as well as apps.

Also, VPN encryption protects all personal information from going to your Android device. Wherein, neither a school administrator nor an employer can know what you’re doing on the internet, giving you the privacy that you deserve while you are using Snapchat.

Can I Use a Free VPN for Snapchat?

We know that many students are having financial issues, so it’s enticing to use a free VPN service. There are tons of decent free plans available.

Many of those will infect your device or even sell your personal data. In addition, some free VPN services claiming to provide good security actually have little to none. Nonetheless, apart from the alarming traits, free VPN services have slow speeds or bandwidth restrictions.

Although it’s important to focus at work or in class, sending a few snaps on Snapchat is pretty innocent. Thus, this article provides you with the best VPN service providers that you can use to bypass Snapchat restrictions. Because a VPN is easy to use, safe, and invisible to others, it is the best solution for Snapchat users who want to blow off some steam on the multimedia messaging app in the form of photos or videos. Nonetheless, all you have to do is opt for the best VPN provider, just like Surfshark, that fits your needs in terms of stability, speed, price, as well as encryption method.

Note: ReviewVPN.com does not own or operate any app nor does it endorse any. The main purpose of this article is strictly for educational purposes only.