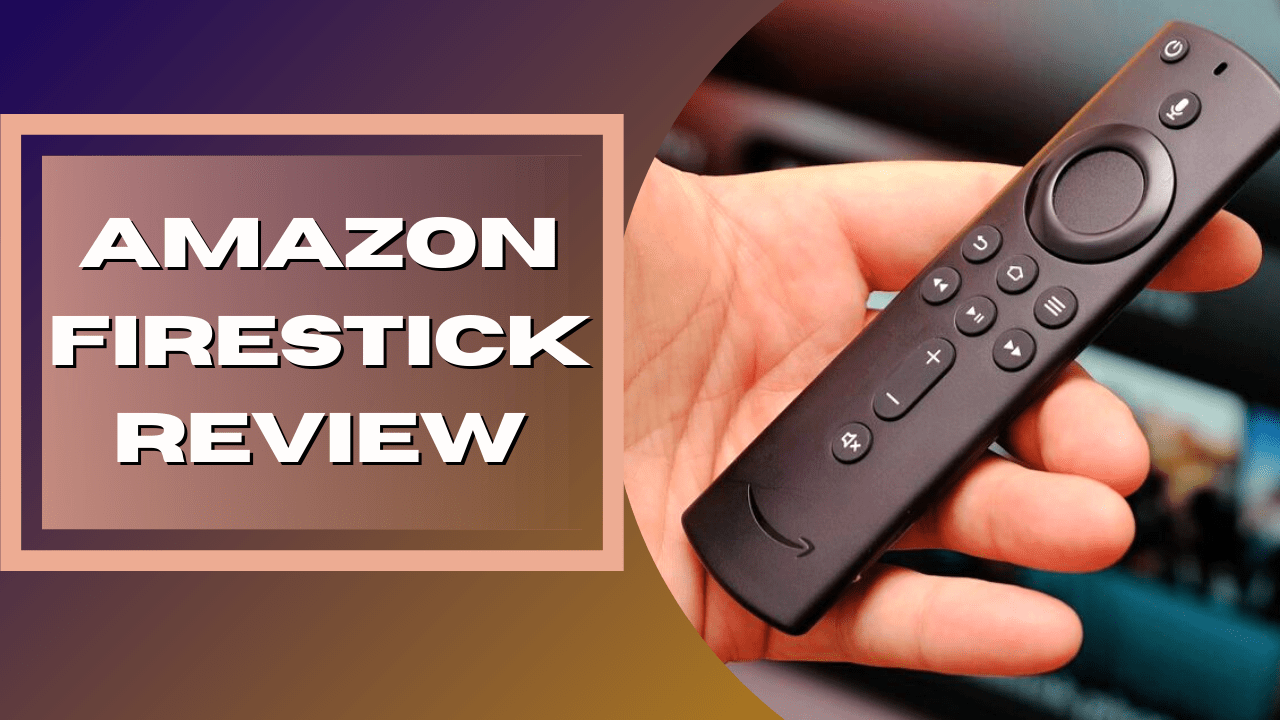 Online streaming continues to increase in popularity, with new options & services every day, and major device manufacturers releasing new products that can be hooked to any television. Google boasts the Chromecast with Google TV, Roku brags a Streambar & an Ultra, and Amazon unleashed the cheapest streamers – the $40 Fire TV Stick and the Fire Stick TV Lite for only $30.

However, this article will review Amazon’s Firestick streaming devices. According to Amazon, compared with its FireStick 2019 variant, the latest Fire TV Stick is 50% more efficient & 50% faster. FireStick users don’t test power consumption but some report the new variant is very quick.

The FireStick remote contains buttons for volume, power, & mute, allowing users to control those functions on their TV — and maybe get rid of the TV remote. Those remote buttons of the FireStick are the only real difference between the FireStick Lite ($30) and the FireStick ($40), you’re paying an extra $10 for TV control.

What Is Amazon Firestick?

Amazon’s Fire TV Sticks are USB stick-sized streaming devices that you’ll plug into the HDMI port on the TV. Fire TV Sticks stream video & audio content from tons of various apps over a Wi-Fi connection. While any person can utilize one of these Amazon streaming devices, having an Amazon Prime subscription allows you to stream additional programming.

The Fire TV Stick is a streaming device sold by Amazon. The company says that the streaming video player can add tons of channels to your television. That includes all the streaming platforms you’re most familiar with, which includes Netflix, Hulu, HBO Now, and Amazon Prime Video, along with network television apps, and tons of less common channels you might be unfamiliar with. The Fire TV Stick allows you to stream your favorite movies and TV shows.

However, with the availability of the cheaper FireStick Lite and the Fire TV Stick 4K (still at $50), the 2020 model Fire Stick is the middle child – but all the Firestick devices are ideal choices for streaming. Yes, Fire Stick’s TV control is awesome, and it offers a lot for $40, which includes integration with Echo devices, a great selection of applications (it now provides HBO Max), and a slick user interface. However, the Fire TV Stick still pushes its Prime Video store, and the device’s home screen could be a bit too busy for users who know what they wish to watch. For an additional $10 for the Fire Stick TV 4K, it offers better features, but for $10 less the Fire Stick Lite is still a good deal.

The Fire TV Stick 4K is slightly larger compared to the standard FireStick, it measures 3.9 x 1.2 x 0.6 inches (Height-Width-Depth). The FireStick is a straightforward rectangular matte black bar with a micro USB port on one side and a male HDMI connector on the other. If the FireStick is slightly large to fit in a port on the TV – a flexible HDMI extender allows you to reposition it at another angle.

The Amazon Alexa Voice Remote has been updated with several new tricks. The 2nd-gen remote is a slim rectangular wand with a pinhole microphone and a circular navigation pad. It still has controls for menu & playback and is now joined by volume & power buttons. The Fire TV Stick 4K model can control the power & volume of the TV, allowing users to jump straight into watching media content without using a second remote. It only toggles power and adjusts volume level, so users can’t navigate their TV menus or alter inputs. However, if the FireStick is the main device you’re going to use, it is a very handy upgrade.

Setting up the Amazon Fire Stick is very simple, and works just like setting up any other streaming device. Plug Fire Stick into your TV, plug in its power adapter to the electric outlet, then simply follow the instructions to connect the streaming device to Wi-Fi.  From there, sign in with your Amazon account and then you’re all set.

It is not necessary to have a premium Amazon Prime account to utilize the FireStick 4K, you can use a regular, free Amazon account to use the device. Nonetheless, if you have a paid Amazon Prime, you’ll automatically obtain access to media content through Prime Music as well as Prime Video.

Like other video streaming gadgets, the amount of services that Firestick supports is increasing constantly. Firesticks can access nearly all of the major streaming applications, including Netflix, Sling TV, Hulu, Pluto TV, Crackle, Tubi TV, Pandora, Amazon Music, Spotify, Amazon Prime Video, and lots more. With numerous services supported, it is almost easier to list the streaming portals the Firestick doesn’t have, like NBC’s Peacock.

The third-generation Fire TV Stick (2020 model) costs $40 and is up for grabs at Amazon as well as other major retailers.

That’s the same price as the 2019 variant Fire TV Stick (second generation), $10 more than the Firestick Lite variant and $10 less than the Fire TV 4K model. The new FireStick appears exactly like the previous FireStick variant: a slim, black rectangle with an HDMI port. The streaming device can be plugged directly into the TV set (also comes with an extender) and since the new variant is not much bigger, you can easily hide it away – just like other dongles such as the Roku Streaming Stick & Chromecast With Google TV.

As for Alexa virtual assistant AI technology,  integration is very splendid, making it easy for users to find the entertainment content they’re looking for with a voice command. Users can utilize either the voice remote or the Echo device in a similar place. Not linking the two during the first setup, Alexa will still sort it out when you initially provide a TV-related request.

You can search for movies or television programs, either by the cast, subjects, directors, or titles, and the virtual assistant AI technology does a great job of finding what you are looking for across your installed applications, such as BBC iPlayer.

Even though the Amazon Fire Stick could not replace a full-fledged gaming console such as Xbox & PlayStation, it does come along with some stuff to have fun with, which includes games like Sonic The Hedgehog 2, The Jackbox Party Pack, or the most played sandbox video game – Minecraft. For parents and their kids, this Firestick feature is an easy way to have fun together.

With regards to hardware, the FireStick 4K model comes along with a quad-core 1.7GHz CPU. It has 8GB of memory, Bluetooth 5.0 with BLE, and MIMO 802.11a/b/g/n/ac Wi-Fi. The Wi-Fi specs are important because the Fire TV Stick 4K doesn’t have an Ethernet adapter. However, you can acquire an optional adapter ($15).

The Fire TV Stick 4K model is almost a flawless video streaming device. The media streamer supports 4K resolution with Dolby Vision & HDR10. It is equipped with an Alexa for voice control with support for a vast range of smart home gadgets. Its new remote can control the volume and power of the television, and it can access an extensive selection of entertainment content – from Amazon’s libraries as well as most major third-party services. Although it doesn’t come along with an Ethernet adapter, that is the only trade-off for faster performance, smaller size, & Dolby Vision-supported streaming device. The Amazon Firestick 4K model is the best video streaming device you can find for $50.

Should You Buy Firestick?

If you want a video streaming device for $30 or $40, it comes down to an option of the Amazon Fire TV Stick. If you want to stream videos in a 4K resolution, then you may choose the Fire TV Stick 4K variant.

Nonetheless, if you’ve already purchased a Firestick, there is no reason for you to purchase the 2020 variant. It appears that HDR & Dolby Atmos are uncanny add-ons for 1080p gadgets, and if Amazon should offer something unique – it should have come along with a full 4K resolution support. Nonetheless, if you already have a 4K television then you should buy a real 4K video streaming device – it would only cost just another $10. If you don’t want to spend a lot of money, you may purchase the Firestick Lite.

Always Use A VPN To Stream Safely, Securely Online

The Fire TV Stick has plenty to offer, not just Amazon Prime Video but also Hulu, Netflix, and almost any other streaming platform that you can think of.  Nonetheless, if you want to access entertainment content in another country, or if you don’t want your Internet Service Provider to monitor what you stream, you must use a Virtual Private Network or VPN. A VPN service, like Surfshark, allows you to stream movies and TV shows on FireStick privately & safely.

The Firestick device is good.

Is the Firestick legal?

Yes, the Firestick is legal.

Is the Firestick safe?

Yes, the Firestick is very safe to use and has no viruses or malware.

The Amazon Fire TV Cube and Fire TV Stick 4K have tons to offer but the simplicity of the FireStick makes it an ideal choice for those who just want a Full HD resolution. Also, it is considerably cheaper compared to many alternatives available out there.

The FireStick comes along with an excellent user interface, including Alexa voice-control – which is a particularly fine addition.  The Amazon Echo is not needed for it to all work, nor is an Amazon Prime subscription.

You really can have a great streaming experience with the Amazon Fire TV Stick as it is your one-stop place for all streaming entertainment content. And, Alexa appears like she is on cue to rule the virtual assistant AI world.