The pricing plan for hotspot shield VPN include $12.99 per month, but like any other VPN in the market, you get a better discount once you pay for a more extended subscription in advance. Subscribing for 12 months brings the cost down to $5.99 per month while a three-year subscription makes it $3.49 per month. It comes with a 7-day free trial, but you must enter your payment info and cancel if not satisfied.

Frequently Asked Questions
What does it cost?
Prices start at $3.49 / mo
How many servers are there?
50000 IPs accessible in over 2000 servers distributed in 25 countries.
What apps are there?
Android, Windows, Mac, and iOS
Are there logs?
Zero logs are kept
What protocols exist?
OpenVPN, PPTP, L2TP/IPSec
Is there a trial?
45-day money-back guarantee 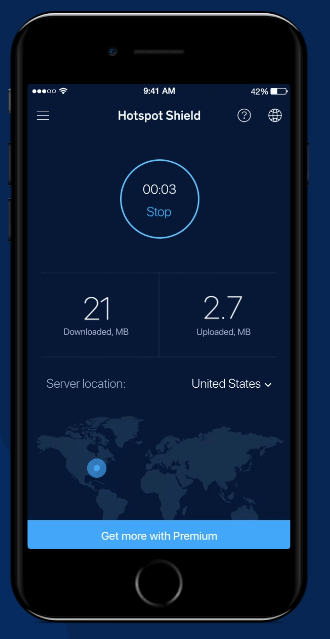 While hotspot shield doesn’t share any personal details about you with the third party, the information can be collected independently from you or your gadget while serving ads from a hotspot shield app, like your gadget’s advertising ID and wireless carrier. In most cases, hotspot shield would regularly redirect user traffic via one of their affiliate networks to make income from purchases that their clients made when using the VPN. So, never should you trust hotspot shield with your personal information.

One of the best things about this VPN is that they fully support anonymous torrenting, unlike most VPNs in the market. The network utilizes a super secure AES-256 encryption to guarantee that all the information being transferred to and fro your gadget is safe. No one can access your network activity or browsing history provided Hotspot Shield upholds its logging policy. For the reason that AnchorFree has endorsed and given instructions on anonymous torrenting, it’s safe to claim that Hotspot shield is the best choice for avid torrenters for secure P2P experience.

Currently, Kodi is the leading streaming network in the world since it is easy to use and comes with numerous add-ons that give its users a vast library of digital content. Nevertheless, Kodi has some inherent security flaws and the most famous add-one frequently feature geo-limitations. This means that it works well when integrated with high-quality VPNs. Therefore, hotspot shield doesn’t work with Kodi since its settings are set dynamically, and they can’t be configured for any devices the software doesn’t support.

While a large and diverse user bases that Hotspot Shield boast, you can think that they could design a product that is similarly diverse and adaptable to any circumstance. However, that isn’t the case.

The VPN is not compatible with TOR or any third party proxy, and they restrict their users to the proprietary Catapult Hydro Protocol. Previously, they allowed the use of OpenVPN protocol, but that chanced once they introduced their Catapult Hydra protocol.

You can use this VPN to bypass the GeoIP bans in your location. You need to change your IP address of the VPN to another server and access any content. Some call this the capability to appear local in a different country.

The elite version supports the OpenVPN protocol, but the technicalities surrounding the free versions are not precise. It comes with a kill switch known as IP leak protection. Bear in mind that the majority of US-based VPNs have been red-flagged by many privacy attorneys because of the data retention surveillance and laws. Therefore, there are numerous reasons why this VPN is not a better option if you care so much about privacy.

It’s a fact that all Hotspot shield resources are funneled into three aspects.

As you can see, responsive client support is not on that list. While the VPN strives to offer an admittedly extensive list of troubleshooting guides and resources, their client support is very worrying. Whenever you have an issue, you will only talk to their support crew via a dreaded customer support ticket.

Hotspot shield is a US-registered VPN. Even though some people might think it is a bad thing because the US is known for numerous surveillance lawsuits, this is not a bad thing from the surfing perspective. In the US, It is illegal for internet providers to log network activity. Having said that, if you find yourself in a mess, you better stick to Tor or any other secure VPN.

Hotspot shield is compatible with mobile apps for Android, Windows, Mac, and iOS.

The VPN presents more than 50000 IPs accessible in over 2000 servers distributed in 25 countries.

While Hotspot shield might be the cheapest anonymous tool, the service provider claims that over 90% of its client use the free app. That is to say that they must monetize your data and traffic. Privacy instruction has a price tag since it will compromise your security. To be honest, this is not worth it.